Can universities contribute to economic development?

Professor Nola Hewitt-Dundas asks whether Northern Ireland needs universities? If it does, then should public money be used to support them? If public money is invested in our Universities, then what role should they play in society and the economy? 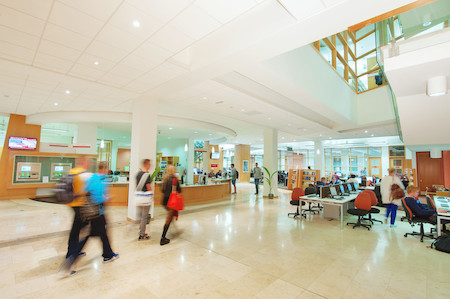 Northern Ireland’s universities have not been immune to recent budget cuts imposed by Stormont. The draft budget in November 2014 proposed a 10.8% cut for the Department of Employment and Learning (DELNI). While the final 2015-16 ‘non ring-fenced’ budget cut for DELNI was 6.4% this was closer to 10% in cuts for the Universities.

Such budget cuts inevitably lead to a short term search for efficiencies, yet more fundamentally they are also leading to a re-evaluation of investment priorities. For higher education, this raises questions about why universities are being funded from the public purse and how they are contributing to the wider NI society and economy.

Contributing to the economy

Recent figures suggest that Queen’s University Belfast (QUB) and Ulster University (UU) contribute a combined £1.5bn to the NI economy each year, through employment of 7,000 individuals and support of a further 11,000 jobs.  Almost 50,000 students pursue education through the Universities with students from outside NI contributing over £100m in expenditure to the economy.  It is unquestionable that NI Universities are contributing to the economy and society but is this enough to drive economic development in the future?

Are we investing enough in higher education?

In Ireland rapid economic growth in the 1980s and 1990s was not attributed to investment in higher education, but instead to incentives and political conditions that were attractive to foreign investors.  Of course, Irish universities were an important source of skilled workers for foreign businesses. But the foreign investment of this period was manufacturing, call centres and software development. Yet this is precisely the nature of recent foreign investments that NI has welcomed recently.  Investments that are 20 years behind those in the Republic.

In the more recent post-recession period, Ireland now attracts advanced manufacturing investments emphasizing Research, Development and Innovation, supply chain optimisation, digital aggregation and analytics, IP management and personalisation and social networking and media. Companies such as Cisco Systems, Laurent Technologies, IBM, Paypal, Google etc. IBM is a good example of an inward investor that has transitioned from a manufacturing plant to providing high-end software, services and R&D through advanced analytics, cloud computing, risk management and big data.  IBM has over 200 patents, employs over 3,500 permanent staff (many of which have a degree-level qualification or higher), collaborate strongly with the Universities and have invested over €66m in a Smart Cities Research Centre.

If Ireland successfully transitioned from manufacturing FDI to high value added activities, then what role did universities play in this?  The story is certainly not one of under-investment but instead the opposite.

In 2000 the Irish Government allocated €646m to establish Science Foundation Ireland (SFI).  SFI provided grant awards to scientists and engineers in science and engineering that underpinned biotechnology, ICT and sustainable energy and associated technologies.  Large sums of public and industry money have been invested in SFI projects since the early 2000s.  In the past two years alone SFI announced the establishment of 7 new research centres with investment of €550m in areas of importance to the future economic development of Ireland.

Do we have this foresight and public commitment to the development of research in Northern Ireland? There is certainly an awareness of the need to provide graduates in the workforce, consistent with the FDI currently being attracted to NI.  Less evident is any vision or commitment to invest in our Universities as central to driving economic development.

Mazzucato in her book, ‘The Entrepreneurial State’ highlights numerous cases where governments have had the vision to invest in research such as nanotechnology, which in turn has led to the emergence of new business sectors. Similarly, it is this investment in the knowledge base which underpins the location decisions of many multinationals.  For example, Ipsen is currently opening a new R&D bioscience research centre in Cambridge MA, USA as part of its open innovation strategy to partner with the wider biotechnology community. Similar initiatives are evident across the sectors, from automotive (BMW) to semiconductors (Intel). Sadly, examples such as these are limited in NI.

The picture in Northern Ireland

At the same time there is evidence that public-led investments have worked in NI and can be central to building global recognition.  For example, in 2003 Invest NI invested £8.28m in the Institute for Electronics, Communications and Information Technology (ECIT). This was noteworthy as it built on earlier models of government-university-business collaboration.  Yet, this investment in ECIT represented a novel (and risky) attempt by government and the Universities to introduce a new model of research and business collaboration.

At ECIT, engineers were employed alongside academics and a balanced portfolio of academic research, patents, licenses, spin-out firms and business collaborations have resulted since.  Through company membership on the Board of the Centre for Secure Information Technologies (CSIT) – a daughter centre of ECIT – industry priorities are integral to the research agenda.  In March 2015, CSIT announced that it had secured an additional £38m funding for research in cyber security in Smart Cities and the Internet of Things.  This funding demonstrates ongoing commitment from QUB alongside validation of the international quality of research being conducted by the Centre with Research Council and Innovate UK funding.

NI is extremely fortunate to have excellent universities with the capability to produce world-class research.  This is a valuable catalyst for economic development, which includes not only the education of highly skilled graduates, but also the potential to attract international governmental and business partnerships and build a global reputation. Competing in the knowledge economy of the 21st Century requires looking beyond metrics on short-term impact and investing in research capability to attract global businesses to NI.  Regrettably a 10% cut in public funding will not achieve this.

Nola Hewitt-Dundas is a Professor in the Management School at Queen’s University Belfast. Her research interests include the dynamics of innovation ecosystems in an international context, innovation, technology transfer and networks with an emphasis on small and medium enterprises, business strategy and technology adoption.