Dr Viviane Gravey and Professor Charlotte Burns from Sheffield University look at how the US continues to push for the inclusion of meat produced at lower standards in the UK-US trade deal currently under negotiation. 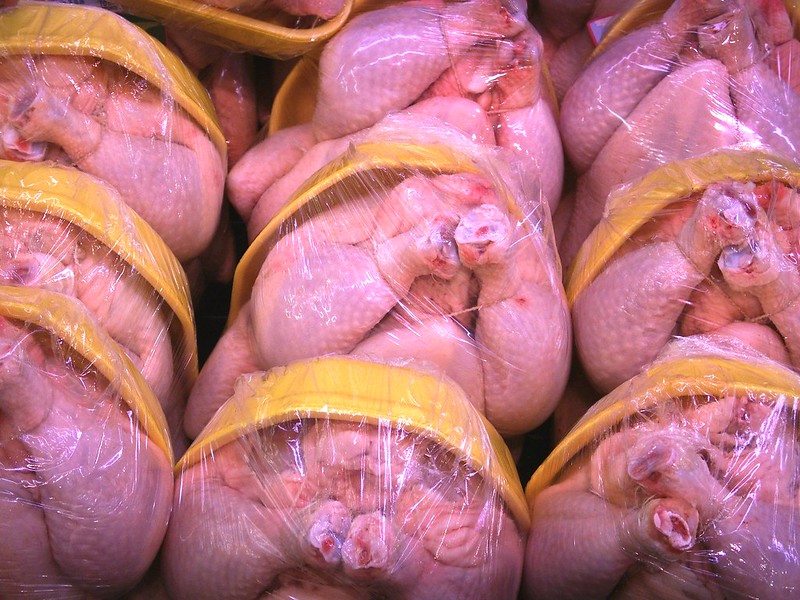 The UK’s future trade deals are yet again overshadowed by the challenges posed by chlorinated chickens to UK farmers, animal welfare regulations and more generally to the UK’s regulatory identity.

Chemical-washed chickens have long been at the heart of EU-US trade conflicts (alongside hormone-fed beef and genetically modified organisms), and their export to Europe has long been an objective of US farmers and trade negotiators alike.

What the US failed to obtain from the EU, it is now trying to gain from the UK – pushing for inclusion of meat produced at lower standards in the UK-US trade deal currently under negotiation. This is not news. Chlorinated chickens have featured prominently in Brexit debates since at least 2017. And US characterization of EU animal welfare and food trackability as ‘foreign trade barriers’ are well known.

Each year the office of the US Trade Representative publish a report on such barriers, suggesting ‘that “place of farming” requirements are unclear, difficult to comply with, and lack a basis in international standards’. This year’s report further voices concern that live cattle from the US cannot be exported to, or via the European Union and objects to ‘the unscientific ban on meat and animal products produced using hormones, beta agonists, and other growth promotants’.

As a former EU member, currently still aligned with EU rules, but with a growing ability to diverge from EU standards, it is wholly unsurprising the UK is being asked to deviate from the EU in UK-US trade negotiations. Indeed, it is in the interests of the US to get the UK to move from the EU position on these issues, in order to strike a ‘symbolic victory’ against the credibility of the European safety concerns. In that respect, we can expect chlorinated chickens to be the first of many demands.

What is news is the willingness of the UK government to accept chlorinated chickens imports. This is in marked contrast with the Conservative Party’s 2019 general election manifesto pledge that ‘in all of our trade negotiations, we will not compromise on our high environmental protection, animal welfare and food standards.’

From Michael Gove in July 2017, to Theresa Villiers in January 2020, opposition to the sale of chlorinated chicken in the UK has been a mantra of successive UK conservative governments. But this does not appear to be the case anymore. A leaked Downing Street memo called for ‘no specific policy’ on animal welfare in US trade talks. While this is new, it is not really surprising. The UK is the smaller party in these talks, and the party who has most to benefit from striking a deal.

As such, as Sam Lowe from the Centre of European Reform argues, ‘It has always been the case that if the UK is to secure a free trade agreement with the US, it will need to find a way of giving America what it wants when it comes to agriculture and food standards.’ The way found is a dual tariff regime: the ban on chlorine-washed chicken would indeed be removed, but only chickens meeting UK welfare standards would benefit from lower tariffs.

Higher tariffs on chlorinated chickens could, depending on how high they are set, offset the production cost differential and make it ‘uneconomical for US producers to export them to the UK’ despite these exports becoming legally possible.

Even if this is only a symbolic US victory, it matters for three reasons.

First, the big policy shift is lifting the ban, because this marks chemical-washed chicken as safe and fit to be eaten in the UK. Once this principle is accepted, tariffs can be changed down the line – initially set high, but then lowered later on.

Second, the chlorinated chickens debate has never been only about chicken – or even animal welfare. It matters for the UK’s regulatory identity as a whole: will the UK remain in the orbit of the European Union, and reiterate its attachment to the precautionary principle? Will it instead jump ship – and embrace the US ‘risk-based’ approach? Or can it develop a new hybrid half-way house between these two regulatory giants?

This has added resonance in the UK context, as we are still waiting for the return of the Environment Bill (which includes the precautionary principle but only ‘so far as relating to the environment’) to the Commons. Parliamentary work on the Agriculture bill has so far failed to enshrine high food standards for imports after Brexit, despite a petition, organized by the NFU and backed by environmental charities, gathering close to 900,000 signatories.

Third, this policy shift is occurring at a time where the UK is still negotiating with the European Union. This apparent willingness to bow down to US regulatory pressures will further reinforce the EU’s concerns that it needs a legally-binding agreement, and not mere political commitments to a level-playing field.

Meanwhile, the possibility of imports of lower-than-EU welfare standards in Great Britain will put added pressure on checks on GB-NI trade, to avoid Northern Ireland being used as a backdoor for American goods into the EU single market.

Professor Charlotte Burns is a Professorial Fellow in the Department of Politics and International Relations at Sheffield University. Her research interests include the factors shaping environmental resilience in the face of external challenges.

Article originally appeared on The UK in a Changing Europe site.