Dr Nicola Carr examines how we deal with criminal records for young people and looks at the benefits of giving them the opportunity to 'wipe the slate clean'. 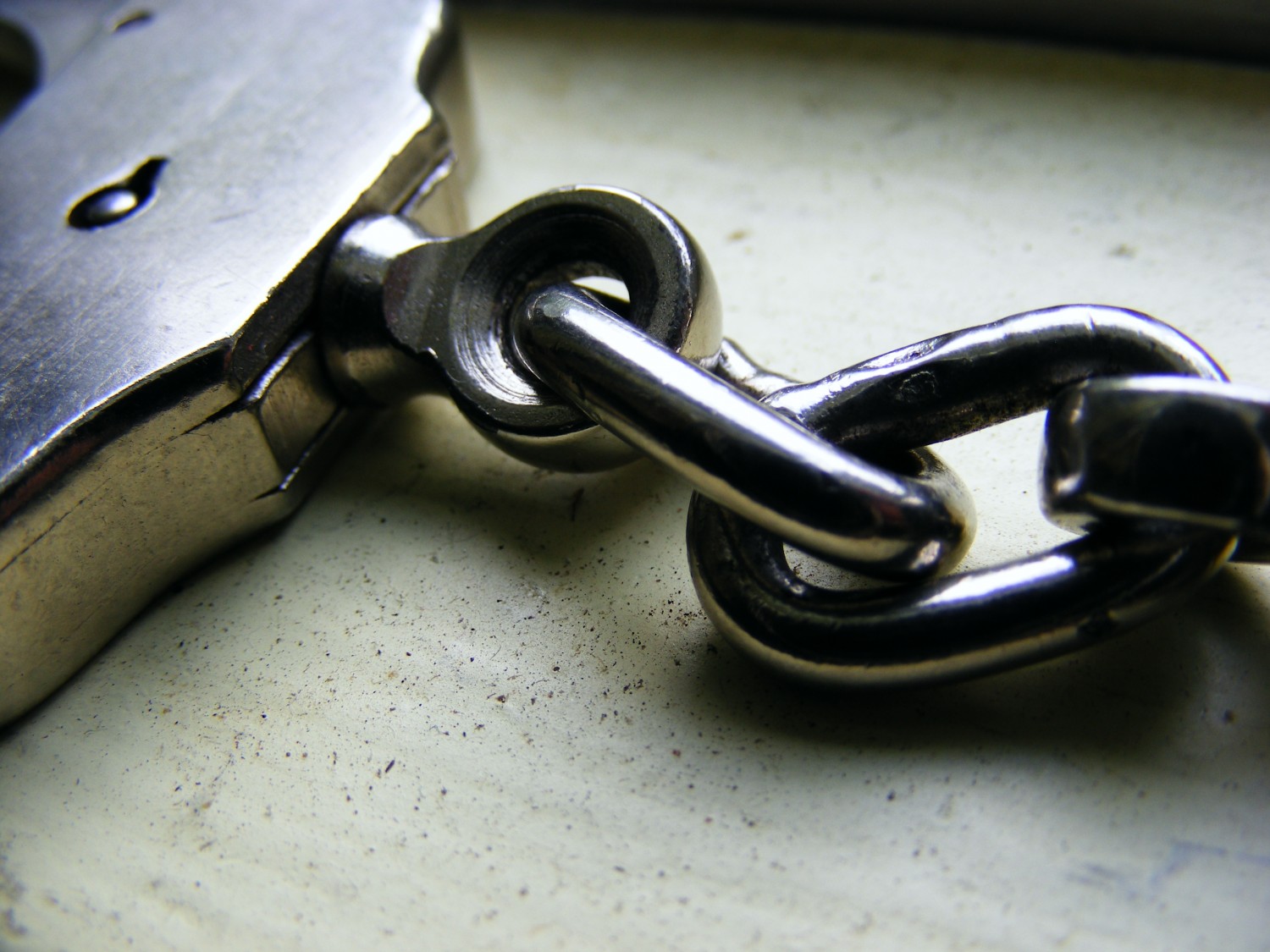 Although there is considerable debate about the extent to which youth justice systems are sufficiently differentiated from the adult criminal justice system, the existence of a separate system acknowledges the fact that young people should be treated differently to adults in the criminal justice process. The Justice Act (NI) (2002) sets out the principles governing the youth justice system in Northern Ireland and includes provisions for the use of youth conferences. Since enactment, restorative based youth conferencing has become the primary mode for dealing with young people in conflict with the law. There are two routes through which a youth conference can take place – either on the direction of the Public Prosecution Service (a so-called ‘diversionary’ conference), or on the direction of the court.

One of the underpinning philosophies of restorative justice is to restore the harm caused by offending and the Northern Irish model has been cited as a model of good practice. However, the principles of restoration are undermined by the fact that a range of diversionary disposals are subject to criminal record disclosure and the rules pertaining to young people’s criminal records fails to adequately differentiate with the system for adults. A range of research has documented the negative impact of criminal records on employment and educational prospects and many European countries operate systems that seal or expunge the criminal records of juveniles.

There are three levels of criminal record checks: Basic, Standard and Enhanced. The distinction between each concerns the amount of information disclosed. A basic check discloses a person’s unspent convictions; it does not provide a full criminal history. A standard check discloses information on spent and unspent convictions and relevant cautions. An enhanced check includes all of this information and ‘any other relevant material’ provided by the police. The latter two checks can only be requested by an AccessNI registered organisation.

In April 2014, the Department of Justice announced new filtering arrangements for criminal record checks. The introduction of filtering has had a paradoxical effect. While putting in place a mechanism through which ‘old and minor’ offences could be removed from criminal record checks, it has made diversionary disposals (such as diversionary youth conferences) subject to disclosure. The routine disclosure of diversionary disposals had ceased in 2011. The filtering arrangements specify that AccessNI can filter certain convictions and disposals from criminal record certificates. This can only occur where the conviction and disposal is considered ‘old and minor’. The time periods that apply are outlined in the table below. If the conviction or disposal relates to a young person (i.e. under the age of 18), a shorter time period applies.

A conviction or disposal can never be filtered if it pertains to a specified offence, or if the conviction resulted in a custodial sentence (irrespective of the offence). Specified offences include the most serious offences such as murder, manslaughter and rape.  However, the list of specified offences is extensive; it runs to almost 1,200 and includes crimes such as destruction or damage of property or threats to do the same. Even if AccessNI filters a conviction or disposal from a criminal record certificate the police still have the authority to disclose such information in Enhanced Criminal background checks on the basis that it ‘might be relevant and ought to be disclosed’.  Finally a conviction will only be filtered if there is no other conviction on the person’s record. 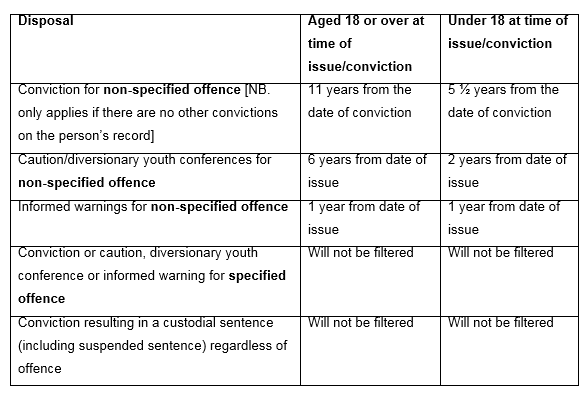 Research on criminal records and young people in Northern Ireland

Recent research commissioned by NIACRO and conducted by Carr et al (2015), documented the numbers of young people processed through the youth justice system and explored key stakeholders and young people’s understanding of the criminal record regime in light of the new filtering arrangements. Similar to a number of other jurisdictions the numbers of young people being processed through the criminal justice system in Northern Ireland has declined markedly in recent years. For instance the number of occasions on which youths were charged/reported to PPS has dropped from 9023 in 2010, to 2248 by June 2014. While this decline is undoubtedly positive, an analysis of the main offences for which young people were charged between 2010-2014, shows many of the most common offences committed by young people might not be subject to filtering because they may fall under the list of specified offences.

This research further reported that many people found the filtering arrangements to be ‘complex and confusing’. Questions were raised about the extent to which young people were receiving appropriate (or any) legal advice when they accepted a caution or other types of ‘diversionary disposal’. Many of the young people interviewed were under the erroneous impression that their record is ‘wiped’ when they turn 18, and few had heard of ‘filtering arrangements’. Stakeholders in organisations working with young people described the use of terms such as ‘diversionary’ as creating the illusion of ‘less consequence’.

An understanding of the nature and consequences of a decision is a central principle of informed consent. If a young person does not understand that a caution or diversionary youth conference may appear in a subsequent criminal record check this raises serious questions regarding the nature of informed consent when young people accept such disposals. This is particularly important as there is an in-built incentive for a young person to accept ‘diversionary’ measures because it avoids having to go to court.  This issue is compounded by the low age of criminal responsibility in Northern Ireland, meaning that children as young as 10 can acquire a criminal record. While different time limits apply for convictions acquired under the age of 18, beyond this the current regime fails to adequately differentiate between children and adults.

As noted at the outset of this brief review, the situation in Northern Ireland diverges from many European countries where stricter privacy rules apply regarding the disclosure of criminal records, particularly those acquired as a young person. In Spain and France a young person’s criminal record is never disclosed, and in Spain it is automatically expunged at 28 years. In Germany only convictions resulting in a non-suspended prison sentence of two or more years can be disclosed and a mechanism exists for automatic expungement after 5 years. And in the Republic of Ireland there is a Spent Convictions Scheme for young people. This requires that there has been no further offending in a three-year period and that the original offence was not serious in nature (e.g. murder, manslaughter or rape).

The Department of Justice has introduced draft guidance for the operation of a review mechanism for filtering decisions. The mechanism allows an individual to seek a review in certain circumstances, where a conviction or disposal has not been filtered from their record. The guidance specifies that young people will be given special consideration in the review process. However, the police can still override the independent reviewer’s decision to filter information. The Draft Mechanism is currently the subject of consultation with a view to the formalizing these arrangements within legislation.  While a review mechanism is welcome, ultimately the Northern Ireland system still falls short of the protections afforded to young people in other jurisdictions.

Significant amount of research details the importance of providing young people with criminal records the opportunity to participate fully in society, particularly through accessing employment. Having a process where young people have the opportunity to have their criminal record reviewed and /or ‘wiped clean’, would move Northern Ireland closer towards international children’s rights standards. It would also facilitate a re-integrative process for young people in conflict with the law to be guided more fully by the principles of ‘proportionality, transparency and fairness’.

The featured image in this article has been published under a Creative Commons licence.