Professor Beverley Milton-Edwards looks at the Sinai region of Egypt which successive governments have failed to control and which have become a breeding ground for Jihadist militant groups. 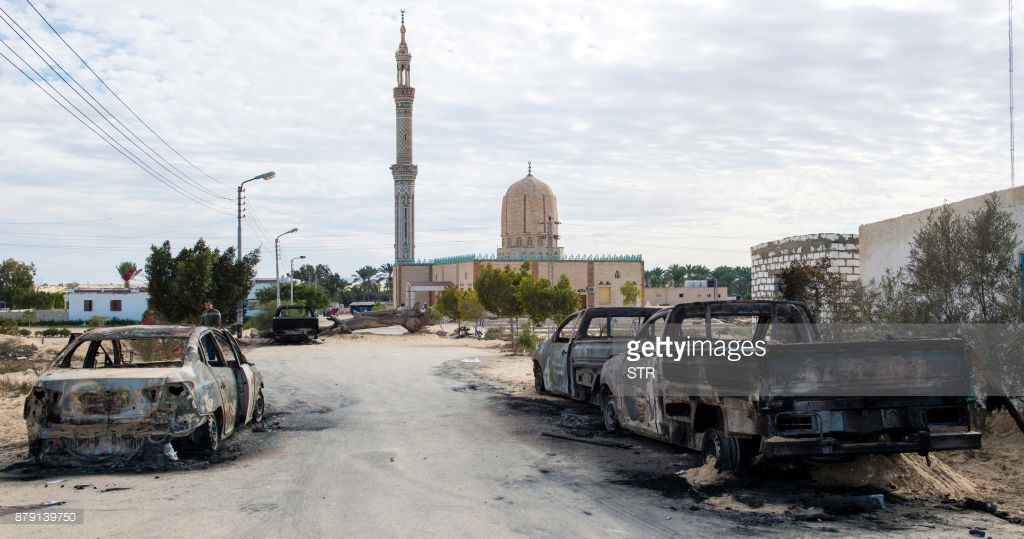 The bomb-and-gun attack in Egypt’s north Sinai on Friday November 24 is now known to have killed more than 300 worshippers at a Sufi-affiliated mosque, making it the deadliest attack in modern Egyptian history. Carried out by terrorists claiming links with the so-called Islamic State (IS), the attack exposed just how weak a grip the Egyptian state has in Sinai – and by extension, just how dangerous this piece of pivotal territory is for the rest of the region.

Though the scale of the attack is unprecedented, Sinai has been unmanageable for years, if not decades. Many security experts agree that large parts of it fit the definition of an “ungoverned space”: the monopoly of force that the Egyptian state should exercise there is weak or nonexistent, while government services to citizens are extremely poor. This makes Sinai ideal territory for violent jihadist militant groups.

Various Western government commissions, including the 9/11 Commission, have found that jihadist terror groups such as al-Qaeda and IS exploit and organise from areas where state power is fragile. It’s in spaces like these that attackers can be trained, and attacks planned and organised. (In similarly “ungoverned” parts of Iraq and Syria, IS even imposed governance of its own in the form of the Caliphate.) Like many ungoverned spaces, Sinai suffers from external interference and weak state control over borders. In 2012, armed jihadists ambushed an Egyptian military base there, killing 16 soldiers and then attempting to infiltrate Israel’s Kerem Shalom border crossing.

The area is also host to like-minded jihadist elements who’ve had the Egyptian state in their sights for years, in particular its security personnel. Among them are al-Qaeda in the Sinai Peninsula, al-Jama’a al-Islamiyah, and the Egyptian Islamic Jihad. And there are other reasons besides why the Sinai is such fertile ground for jihadist groups, not least its myriad illicit income streams: extortion, kidnappings for ransom, criminal networks including smuggling and human trafficking and local “taxation” regimes.

Complicating the picture are the complex dynamics of the local population, in particular Bedouin tribes. The tribes have hindered the extension of Cairo’s power in the Sinai, and the social contract is not strong. But that doesn’t mean jihadists have an easy time recruiting from the tribes. While some tribes have found different forms of modus vivendi with the jihadists around specific activities, others have held out against Cairo and local militants alike.

Successive Egyptian presidents, including Hosni Mubarak, Mohamed Morsi and now Abdel Fattah el-Sisi, have all struggled to control the region. But for el-Sisi, the challenge is especially acute.

Since he took power in 2013, jihadists based in Sinai have launched at least a dozen major terrorist attacks on Egyptian security personnel and consistently undermined physical security infrastructure, with raids on military bases and checkpoints. They have also mounted numerous major attacks on civilian targets, including a Russian airliner, Metrojet Flight 9268, which was bombed in October 2015, killing 224 passengers and crew.

Assaults on tourists have decimated the south Sinai economy and denied Cairo vital revenues. Analysts estimate that tourist destinations such as Sharm el-Sheikh have been hit particularly badly. In 2016, hotel room occupancy rates hit unprecedented lows, and they have not bounced back; emergency government security provisions to help the tourist industry have made little impact.

The Sinai is a crucial link in a jihadist corridor from Asia to Africa. Jihadists from Iraq and Syria can move via Sinai-based cells to Libya and other parts of North Africa and the Sahel. The route works in both directions: in 2013, UN experts warned that weapons were flowing from Libya through Sinai to arenas elsewhere in the Middle East.

Cairo’s international supporters, among them the Saudis and the Trump administration, are providing ample security assistance – intelligence, military aid and so on. Israel in particular remains anxious about Sinai-based militants; Egypt has duly imposed buffer zones at the Sinai-Israel-Rafah border and demolished smuggling tunnels into the Gaza Strip.

El-Sisi has bet his legitimacy on making Egyptians feel safe again. His promised robust counter-terrorist measures to secure the country including a major military offensive in Sinai, using everything from air strikes to curfews. Yet as the carnage on November 24 makes plain, his “hard security” approach doesn’t seem to be working. Instead, the threat is growing, and contributing to turbulence that the Middle East and North Africa can ill afford.

Article originally appeared in the Conversation.