Nearly 30 years after Hamas was founded in the occupied Palestinian territories, it is now revisiting its founding ideals and principles says Professor Beverley Milton-Edwards. 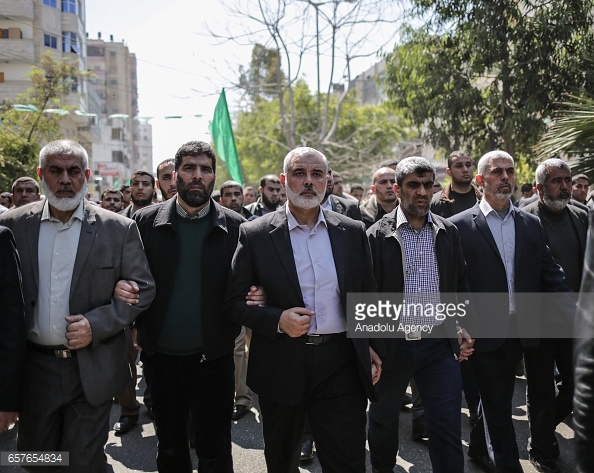 Nearly 30 years after Hamas was founded in the occupied Palestinian territories, it is now revisiting its founding ideals and principles. The move comes at a watershed moment as the senior leadership also undergoes a significant reshuffle, a process that has been long in debate and fruition.

The changes—aimed at appeasing domestic constituencies and establishing some distance between Hamas and the parent movement of the Muslim Brotherhood—are likely to get a mixed reception in the Middle East and Western capitals. While the Hamas leadership hopes their changes may lead to improved relations with regional power brokers such as Egypt, it is unlikely to lead to the kind of moderating shift that Western diplomats have long demanded of the movement.

In the last year, Hamas has worked assiduously to rebuild relations with Egypt. It considers President Abdel-Fatah el-Sissi’s country a key determinant to its future in the Gaza Strip, with nearly two million inhabitants.

Hamas, founded in 1987, authored its charter document during the height of the first Palestinian Intifada. These “new kids on the block” emerged with a commanding rhetoric of jihad and enmity against Israel’s occupation of Palestinian lands from, in its words, “the Mediterranean Sea to the River Jordan.” Hamas’ descriptions of Israel drew on anti-Semitic tropes crudely taken from from the infamous “Protocols of the Elders of Zion.”

The charter declared Hamas an Islamic resistance movement to rival the then-dominant Fatah faction of the Palestine Liberation Organization (PLO). Hamas’ leaders reviled the PLO for being open to negotiating with Israel.

As Hamas leaders now set about revising the charter, they’ve set aside the exhortation to jihad against Israel. And the new charter emphasizes leaders’ long-held willingness to move from maximalist positions. The revised charter, for example, offers the possibility of Hamas accepting political solutions to achieving Palestinian statehood in the territory of the West Bank, Gaza Strip, and East Jerusalem. In short, this could be Hamas’ two-state solution moment.

The strength of the new Hamas position would be that it has brought the hardline elements of the movement, including the Izz-a-din al-Qassam Brigades (IQB), into the decisionmaking process. The revised charter represents a form of moderating influence from leaders within Hamas that have held to pragmatic political positioning. In this respect, it is a triumph of politics over resistance.

This is evident in the inclusion of the Gaza-based Yahya Sinwar into the new leadership structures, to replace former prime minister of the Palestinian National Authority (though a disputed one) Ismail Haniyeh. Sinwar was one of the founders of IQB and epitomized the uncompromising mode of the early Hamas years. In this sense, the new Hamas position is more solidified and represents a discussion and decisionmaking process endorsed by all wings and capturing all ideological positions.

As such, this compromise position could be an important re-entry point for Hamas with both regional leaders and international actors. President Abdel-Fatah el-Sissi of Egypt continues to play a mediating role between Gaza’s leaders and the Israelis, for example.

The opportunity to employ constructive ambiguity around such compromises, however, will depend on Egypt’s will to urge Hamas away from violence and towards a political track.

The Hamas leadership, buoyed in the wake of the Arab Spring by the ascendance of the Muslim Brotherhood and President Mohammed Morsi to power, saw the future as rosy. When military forces commanded by el-Sissi ousted the Muslim Brotherhood in 2013, however, the new Egyptian leadership deeply distrusted Hamas, seeing it as part of the wider problem of Islamist forces.

In the intervening years, Hamas leaders have worked assiduously to re-build trust with Cairo.  The Hamas leadership understands the extent to which its fate, and the Palestinians in the blockaded Gaza Strip, is tied not just to Israel but also to Cairo.

Egypt has played a significant role alongside Israel in imposing and maintaining the blockade on Gaza. This has exacerbated a humanitarian crisis and prolonged economic collapse in the Hamas-ruled territory. Nevertheless, Hamas has clung onto power.

The revised charter will emphasize that Hamas is a Palestinian movement. Slogans of the past that proclaim Hamas a “link in the chain” to the parent movement of the Muslim Brotherhood headquartered in Cairo are likely to be dropped. The Hamas movement, like its counterparts in Jordan, knows the importance of creating political distance from what is a declared terrorist menace in capital cities like Cairo and Riyadh.

The way forward, evident in the revised charter, and the forthcoming changes in the political leadership are important. Such modifications will help bring Hamas back into the Egyptian fold. President el-Sissi’s government already has a role in deciding Gaza’s future, and can hold the reigns in restoring unity between Fatah and Hamas. The ongoing political deadlock in Palestinian politics guarantees perpetual stagnation of the reconstruction of the Gaza Strip and in turn undermines Israel’s security. The U.S. government would do well to encourage President el-Sissi take the lead in this particular Middle East power play.