Dr Julie Norman challenges some of the myths surrounding youth activists involved in the conflict in Palestine. 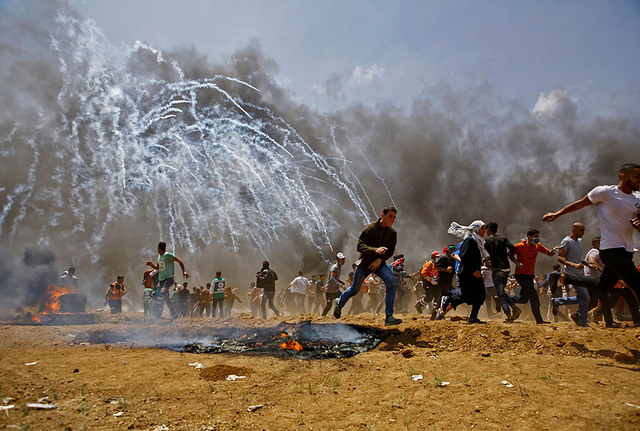 Wisal Sheikh Khalil was just 14 years old when she was shot dead by an Israeli sniper during the protests on 14 May this year in Gaza, Palestine. Of the 60 Palestinians killed, eight were under 16 years, and most were under the age of 30. Earlier this month, 17-year-old Ahed Tamimi was sentenced to four months in prison by an Israeli military court, just one of over 300 Palestinian minors held in Israeli custody.

It can be hard for people outside the conflict to understand what motivates young Palestinians such as Wisal and Ahed to risk arrest, injury and death. Worse, there are several persistent myths which have clouded people’s perceptions about Palestinian activism, and youth activism more broadly.

My research with young Palestinian activists over the past ten years has given me a chance to investigate how they understand their role in the conflict – and collect the evidence needed to challenge those myths.

Young people are ready to die

During the height of the second intifada (or uprising) in the early 2000s, a story spread that young Palestinian activists were seeking death through suicide bombing. This idea has persisted in Palestine and throughout the Middle East, with both media and academic focus on youth “radicalisation” feeding into the rhetoric that young people are drawn towards violence or self-sacrifice.

Some youths may be thinking about martyrdom; Wisal, for example, had told her mother she was prepared to die. But the actions taken by most young Palestinians are anything but a death wish. Rather, they are attempting to transform their daily lives under occupation. As Palestinian journalist Mariam Barghouti wrote this week:

The misconception is that we actually have a choice, that we are wilfully choosing death. The truth is that the only remaining option is to silently be imprisoned, controlled, dispossessed, and attacked for being Palestinian. There is no choice but to seek life, and that is all that we are doing. This is our crime. We are the criminals that dared to wish for life.

A related myth is that of the “youth bulge”: the idea that the sheer size of the youth population in the Middle East will lead to more resistance. In reality, that is not the case. While 30% of the population in Palestine is between the ages of 15 and 29, there is not notably more or less Palestinian activism now than there was in the past.

As a protracted conflict, resistance in Palestine is intergenerational, with many of today’s young people taking inspiration from the earlier activism of their parents and grandparents, many of whom still participate in demonstrations, protests and other forms of everyday activism.

It is a misconception that youth-led protests spontaneously erupt in Palestine. In fact, Monday’s protest was the culmination of over six weeks of protest at the Gaza border. Villages across the West Bank have held weekly demonstrations for years – some for over a decade.

Young people organise through local “popular committees”, campus groups, social media, word of mouth and direct outreach in villages, refugee camps and communities. While protests such as Monday’s garner the most attention, young people are active in other ways as well. They coordinate Boycott, Divestment and Sanctions (BDS) campaigns, use media, music and art as modes of resistance and connect with international solidarity groups.

Young people are the pawns of political parties

There were reports that Hamas had orchestrated or hijacked Monday’s protests, suggesting that the estimated 40,000 participants – mostly young people – were simply political pawns.

While Hamas did provide logistical support throughout the protests, nearly all young activists I have interviewed saw their resistance as distinct from any political party – Fatah or Hamas, neither of which has served Palestinian civilians well.

To suggest that young activists are passive pawns manipulated by the parties undercuts the agency and leadership that young Palestinians have expressed in the absence of strong leaders.

Young people are the future

Young Palestinians are not just the future – they are also the present. To refer to young people only as “the future” diminishes the important role they are already playing in Palestine, and throughout the Middle East, to reshape their societies and challenge political realities.

Young people are neither passive victims nor violent extremists; they are leaders, activists, students, artists and engaged citizens ready to challenge the status quo, not only for the future, but for the immediate present.