There are actors involved in all sides of this dispute who must now encourage enduring dialogue for conflict prevention. Jerusalem should remain the city of peace not conflict says Professor Beverley Milton-Edwards. 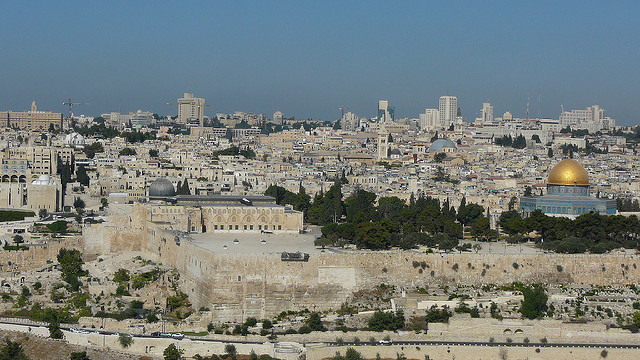 A fatal attack on 14 July 2017 at Jerusalem’s Al-Aqsa mosque compound and the ensuing crisis between Israel and the Palestinians highlight the ongoing challenge of securing holy places in deeply divided cities such as Jerusalem.

Israeli security measures have led to growing international concern but there is an apprehension that this will do little in the long-run to resolve the challenge of freedom of faith in a shared religious space.

For billions of worshippers across the globe – whether Jewish, Christian or Muslim – Jerusalem is a sacred and holy space. It is regarded as the city of peace. For Muslims the al-Aqsa mosque and the Dome of the Rock compound in the heart of the Muslim Quarter in Jerusalem’s Old City is considered the third most holy after Mecca and Medina.

Al-Aqsa is the site of the first qibla (direction of prayer), and according to tradition the place to which the Prophet Mohammed journeyed on winged horse and ascended to heaven.

Before assuming Muslim sanctity Jewish custom ascribes the site as the place where First and Second Jewish temples existed. Jewish law prohibits Jews from entering the compound and praying there, as it is considered a holy of holies. But Al Aqsa’s Western Wall is a remnant of the Jewish temple that millions of Jews pray at.

Both Palestinians and Israelis attach enormous importance to Jerusalem. For Palestinians the city, including its holy shrines, lie at the core of their national identity and internationally recognised rights to self-determination. Unity over holy sites such as al-Aqsa transcend politically partisan elements.

For the best part of a century, Palestinians have rallied to protect the Al-Aqsa compound. But it has also been the site of contest and conflict with Israel since it occupied the eastern half of the city in 1967. In 2000, following a visit by then Israeli Prime Minister Ariel Sharon to Al-Aqsa, Palestinian protest erupted and morphed into the Second Intifada.

Indeed, when Israel captured Jerusalem in June 1967 it declared the city the unified capital of the state. Israel cleared space in the Moghrabia area close to the Western Wall and it has since become a busy site of pilgrimage and prayer.

Nevertheless the international community has continued to refuse to recognise the Israeli claim to Jerusalem preferring to locate their Embassies in Tel Aviv.

The spiral of violence and protest between Palestinians and Israeli forces since the deadly incident has exposed the lack of truly meaningful dialogue, cooperation and concern between Israel, the Palestinians and Jordanian custodians of the Al-Aqsa compound.

Israel’s unilateral security steps had included a decision to install metal detectors and security cameras. This is in addition to the stringent security measures that Israel has permitted itself to regularly employ against Muslim worshippers, and in particular Palestinians, in exercising their religious rights of freedom.

For decades the ritual of Friday prayer at al-Aqsa has given rise to Israeli security measures to limit access of Palestinians from the West Bank and Gaza Strip. This has included the prohibition of entry for certain age groups, particularly younger males and flying checkpoints and identity card checks in the crowded and narrow alleys of the Muslim Quarter in the Old City that lead to the gates by which worshippers can enter.

Jerusalem has long been a contested city. In modern times the city’s governing authorities had worked within a ‘status quo’ framework for the management of the sites such as the Al-Aqsa mosque.

Critics of Israeli policy around the al-Aqsa compound contend, however, that there is evidence of an incremental assertion of Israeli sovereignty on parts of the site. Nevertheless Israel contends with a major security dilemma at and around the compound as it abuts the Western Wall and manages the demands of radical Jewish groups seeking access to Al-Aqsa.

The international community has long held Jerusalem and its holy places to be of importance. Shortly after the United Nations was formed, and as it played its part in the attempt to resolve the conflict between the Zionist movement and the Palestinians, it sought to identify holy spaces and proposals to share them for all. Despite long- disagreements over some sites, the al-Aqsa mosque compound was designated as one such space.

The UN is again seeking to play a role in finding a formula that will curb the current crisis. Yet they have resorted to timeworn slogans and exhortations in their declarations calling for restraint and a preservation of the status quo. All parties involved on the ground in Jerusalem will receive this as ineffective cant.

UNESCO, has, however, emerged to play an increasingly important part in how the al-Aqsa site, along with others in Jerusalem, can be managed. Some Israeli politicians, however, are increasingly sceptical of the organization. Religious leaders including those from other faiths, have also intervened. Pope Francis, has spoken of his “trepidation” at “the grave tensions and violence” in Jerusalem and at Al-Aqsa.  He called for moderation and dialogue that would lead to reconciliation and peace.

But in Jerusalem, Israeli politicians and government officials have stressed their security concerns. For their part Palestinian Muslim religious officials and Jordanian custodians of the holy place have continued to condemn Israel as an occupying power.

The Arab League has weighed in calling Jerusalem a “red line” and accusing Israel of “adventurism” and warning that further Israeli measures on Al-Aqsa could escalate to a “crisis with the Arab and Muslim world.”

Current events highlight that sharing the city, and in particular its holy places, has never been more challenging. It also reveals the near absence of trust between security and religious officials on all sides involved. The reversal, by the Israeli government, of a decision to install metal detectors at al-Aqsa is to be welcomed. It will defuse the current crisis.

Yet there are actors involved in all sides of this current dispute that US politicians, the government, and other organizations must now engage with to encourage enduring dialogue for conflict prevention. Ultimately Jerusalem should remain the city of peace not conflict.