Professor John Garry and Dr Neil Matthews from the University of Bristol looks at the reasons behind the resignation of Deputy First Minister Martin McGuinness and looks at what this means for power sharing and the relationship between the DUP and Sinn Féin. 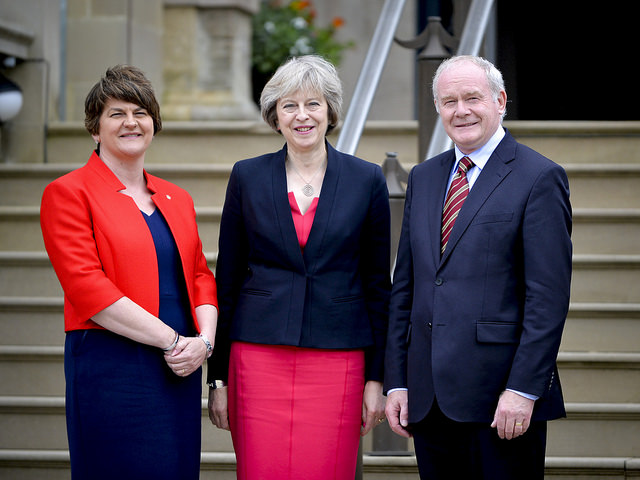 The Northern Ireland power-sharing political settlement is such that its leaders are like conjoined twins; if one of them decides to leap off the cliff the other one plummets also. So when Sinn Féin’s Martin McGuinness, deputy first minister, resigned his position, it brought to an abrupt halt Arlene Foster’s tenure as first minister – and could potentially end ten years of power sharing at Stormont.

The relationship between Foster’s Democratic Unionist Party and Sinn Féin has become poisonous of late, and the dramatic announcement by McGuinness is the manifestation of a complete breakdown of trust between the two coalition parties.

The issue that precipitated the collapse is the so-called “Cash for Ash” scandal whereby a scheme to incentivise the use of green energy was mismanaged, with major financial implications for the public purse (to the tune of £490m). As the minister who oversaw the scheme’s initial design and implementation, Foster stands accused of gross incompetence by all other parties.

This includes Sinn Féin, which issued Foster with an ultimatum: step aside as first minister while a full investigation into the scheme takes place. Foster’s steadfast refusal to do so has seen the crisis escalate, with McGuinness popping the power-sharing balloon and almost certainly setting Northern Ireland on course for an election.

Back to the polls

Attention now turns to the secretary of state for Northern Ireland, James Brokenshire, who – according to the rulebook – is obliged to call an election unless Sinn Féin changes its mind and nominates a replacement for Martin McGuinness in the coming week. Such a u-turn seems unlikely. Indeed Sinn Féin’s electoral battle cry is already being practiced: the DUP is “arrogant” and “out of touch” with ordinary taxpayers horrified at a colossal squandering of their money.

It is ironic, and loudly emphasised by the opposition parties, that an election would put the heating scandal on the back burner, as any formal investigation would be delayed until after an election. How this sits with a Northern Ireland public which went to the polls only seven months ago remains to be seen.

At face value, “Cash for Ash” is an issue that would be likely to dominate an election campaign in any country – politicians accused of incompetence and corruption. However, it is always unwise to take things at face value in Northern Ireland. This scandal is merely the over-heated tip of a “green and orange” iceberg into which the ship of state has crashed. Sinn Féin’s anger at the DUP’s steadfast refusal to concede ground on core republican aims, such as an Irish Language Act, has rendered the power-sharing coalition so fragile. An election is likely to be characterised, yet again, by a focus on ethno-national issues.

In terms of electoral outcomes, things are not likely to change terribly much from the 2016 Assembly tally. The DUP and Sinn Féin are odds-on favourites to emerge as the two largest parties, albeit to an Assembly reduced from 108 to 90 members after the implementation of the Assembly Members (Reduction of Numbers) Bill 2016. Sinn Féin has however already stated its unwillingness to return to the status quo.

An election may simply usher in a lengthy period of inter-party talks, in which Sinn Féin attempts to secure concessions from the DUP and the approach to power-sharing government (perhaps even the central issue of ministerial responsibility) is tweaked once more.

Any concessions will, however, be hard won – if won at all. The DUP will be loath to appear to dance to Sinn Féin’s tune or offer up Foster’s scalp as a sacrificial peace offering. Given such likely intransigence, the electorate in Northern Ireland could be prescribed a lengthy dose of something they know too well: direct rule.

Dr Neil Matthew is a Lecturer in British Politics in the School of Sociology, Politics and International Studies at University of Bristol.