Dr Julie Norman busts some of the myths surrounding the current hunger strike by Palestinian prisoners in Israeli jails. 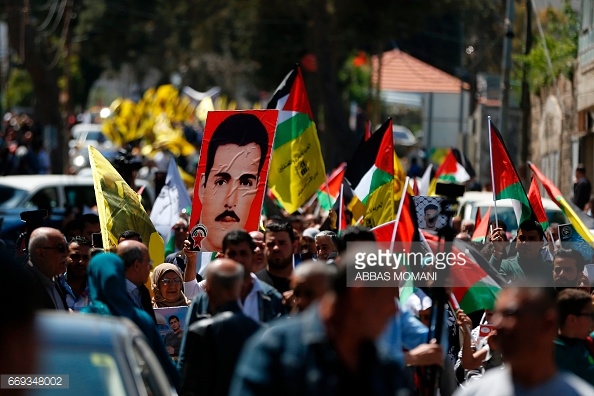 Approximately 1,200 Palestinian prisoners are in a second week of a hunger strike, following the controversial publication of an op-ed in the New York Times by the high-profile prisoner Marwan Barghouti. The hunger strike has brought renewed attention to the issue of imprisonment in Israel, where the approximately 6,500 Palestinians incarcerated in Israeli jails are viewed as convicted terrorists by most Israelis, but considered political prisoners by most Palestinians.

Hunger strikes are not new in Israel. However, as the first mass collective strike in several years, this strike is notable, especially with the leadership of Barghouti who – despite serving multiple life sentences – is often compared to Nelson Mandela and enjoys popular support in Palestinian polls. Many misconceptions about the hunger strike remain. My research with both ex-prisoners and former members of Israel’s security sector counter several common myths.

Myth No. 1: Prisoners are striking to get released from prison.

Palestinian hunger strikes, like those undertaken in Northern Ireland and South Africa, are usually focused on improving conditions and seeking rights inside the prisons, articulated to prison authorities via a list of demands. In past strikes, demands have included increasing the number of blankets, giving more time in the yard and granting access to books, radios and television.

In the current strike, the primary demand is to ensure regular family visits. Israeli prison policy allows for two monthly family visits; however, because family members in the West Bank and Gaza must apply for permits to travel to Israel (which are often denied), some prisoners have gone years without a family visit. Also, the International Committee of the Red Cross (ICRC) reduced coordinated family visits in the summer citing budgetary limitations.

Other demands include pay phones to make family calls, improved medical services and an end to administrative detention (detention without charge or trial).

To listen to Julie’s recent interview on The Takeaway, click here.