The Problem with Petitions of Concern

Ahead of another divisive debate on welfare reform in the Northern Ireland Assembly, Dr Alex Schwartz examines the Petition of Concern and asks whether it is appropriate to use the procedure to protect party-political interests. 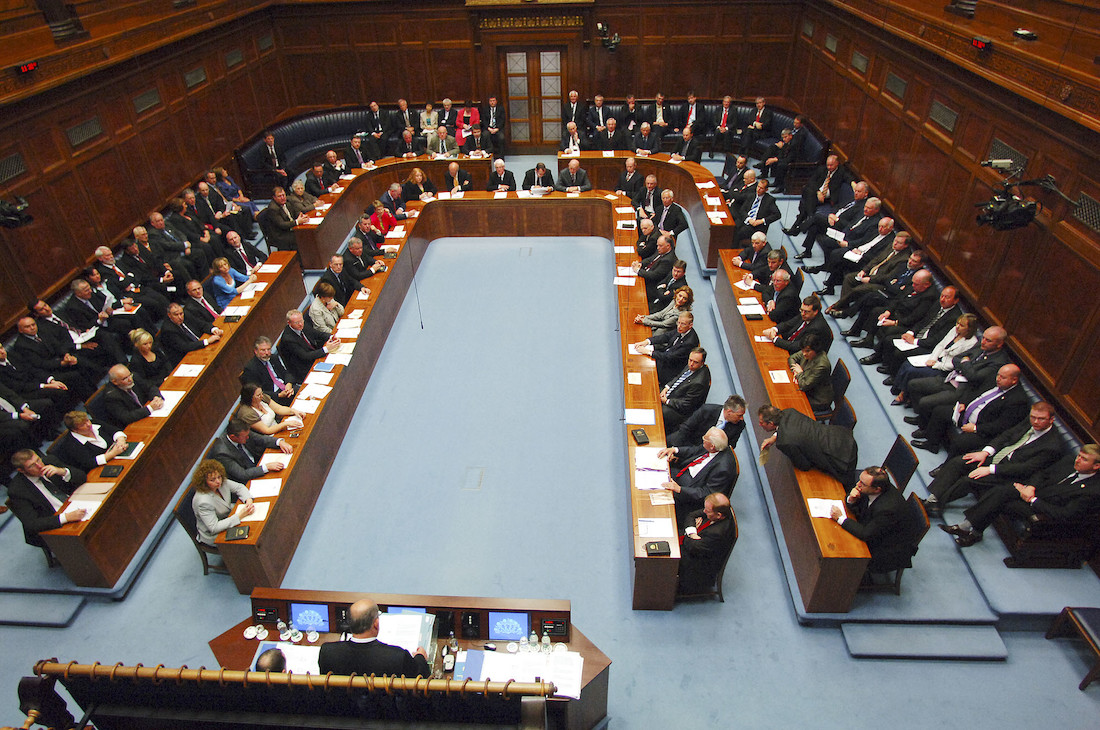 One of the overshadowed aspects of Northern Ireland’s Stormont House Agreement is the pledge to make changes “to the operation of the Petition of Concern mechanism through a protocol agreed between the parties”. This is a timely promise. Although virtually every important aspect of Northern Ireland’s system of power-sharing has its detractors, dissatisfaction with the Petition of Concern has been mounting.  The Petition of Concern is effectively a veto power. It allows a group of at least 30 MLAs to block a decision of the Assembly by requiring a show of “cross-community support”, i.e. the support of both a majority of designated unionist MLAs and a majority of designated nationalist MLAs.  This veto power can be applied to any decision of the Assembly, regardless of subject-matter, be it a legislative bill or a simple motion. In short, there is no topic, however mundane, that cannot be the subject of a Petition of Concern.

Objections to the Petition of Concern come in several forms, but one criticism gaining traction, both in and outside the Assembly, comes from those who worry about the potential for abuse. These critics are not necessarily against the idea of a mutual veto power for unionists and nationalists.  They argue, however, that the Petition of Concern is increasingly used to protect party-political interests and derail “bread and butter” politics.  And there are certainly many examples that would seem to support this line of criticism. The DUP have used the Petition of Concern to block an investigation into the alleged misconduct of one of their own and to block legislation that would prohibit MLAs from “double jobbing”. More recently, Sinn Féin used the procedure to block the passage of the Welfare Reform Bill. This last example is arguably the most striking, and this week there is a strong possibility that further use of the Petition will disrupt progress towards resolving the welfare reform impasse and send Northern Ireland’s system of government back, once again, to the brink of collapse.

Misuse of the procedure

The problem with these uses of the Petition of Concern is that they have nothing to do with the underlying rationale for the veto. The Petition of Concern must be understood as a part of the system of government set up under the Good Friday Agreement. The keystone of that system is inclusive power-sharing between British unionists and Irish nationalists.  Elections to the Assembly are by proportional representation and the political parties are entitled to a share of ministerial departments roughly proportionate to the number of seats they win. The First Minister and deputy First Minister, who jointly lead the Executive and have identical roles and powers, are appointed separately by the largest parties from each of the two major ethno-national communities. The point of all this power-sharing is to create a government with some reasonable chance for broad-based legitimacy among both unionists and nationalists.

But executive power-sharing alone cannot prevent one community from legislating its distinctive group preferences at the expense of the other.  Hence, the need for some kind of veto power. Unfortunately, however, the parties have not been able to resist the temptation to use the veto for broader purposes. As divisive as welfare reform and reproductive rights are in Northern Ireland, to take two important examples, they are also the kinds of issues that tend to divide any modern and diverse society. There is no compelling reason, particular to the circumstances of Northern Ireland, to insulate such matters from the normal fray of democratic decision-making, subject of course to human rights standards.

What should it be used for?

So what kinds of matters ought to be subject to the Petition of Concern?  I would suggest three broad categories, recognizing of course that the boundaries may sometimes be hard to define in practice:

(1) decisions concerning language, culture, and symbols (including the display of flags) which have an obvious ethno-national resonance;

(2) decisions which relate to the legacy of the conflict in Northern Ireland, including decisions relating to victims and survivors, the commemoration of members of the security forces or paramilitary organizations, and truth recovery for conflict-related deaths; and

(3) decisions which relate to the constitutional structure and institutions set up under the Good Friday Agreement.

This last category would include decisions relating to the North/South Ministerial Council, the Northern Ireland Human Rights Commission, and the structure and procedures of the Assembly itself. In all such matters, unionists and nationalists have, almost by definition, distinctive group perspectives.

How might the Petition of Concern be reformed to limit its use to these issues?  One option would be try to exhaustively list the various topics to which the procedure might be applied. The problem with this approach is that the boundary between normal ‘bread and butter’ politics and constitutional politics is nebulous and so it is difficult to precisely anticipate which issues will be injected with ethno-national significance in advance. A better solution would be to build in some review mechanism based on the criteria outlined above.  One possibility then is to establish a statutory tribunal, composed of senior judges, to review the use of the Petition of Concern in cases where some abuse is alleged. There is precedent for this sort of mechanism in Bosnia-Herzegovina, where the Constitutional Court can be called on to scrutinize the use of the “vital national interest” veto.  A political, and probably less expensive, alternative would be to empower the Assembly’s Presiding Officer to vet and possibly reject a Petition of Concern in cases where some abuse is alleged. To assist the Presiding Officer, guiding criteria (along the lines described above) could be agreed to on a cross-community basis.

It is too early to tell what will come of the Stormont House Agreement’s pledge to reform the Petition of Concern; virtually everything in the Stormont House Agreement is still up for grabs. The two parties with the most power to effect change, the DUP and Sinn Féin, have also both benefited from abusing the veto in the past.  If real reform is to occur, they will have to recognize some compelling benefit, to themselves or to the people of Northern Ireland, in reciprocally disarming themselves and learning to live with decisions that they do not necessarily like.  But that is what democracy is about.