Commentators were quick to blame Brexit or fallout from the Storey funeral. But how close are these explanations to the truth and to what extent can they help us understand how such events could be prevented? 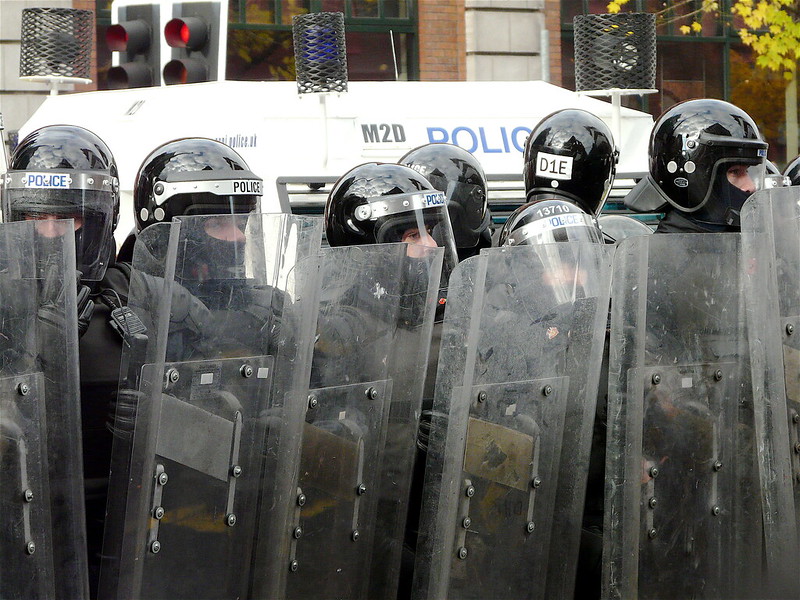 Eight.  That is the age of the youngest person alleged to have been involved in the Spring riots. Eighty-eight.  That is how many police officers were hurt. The violence erupted across several, mainly loyalist communities during early April, and whilst not a new sight, was some of the most damaging in some time. International media captured youth who were captured masked and mobilized, silhouetted by the glare of burning infrastructure and missiles. The picture of a bus burning on Lanark Way in West Belfast became symbolic of the violence. At that time, the Children’s Commissioner, Koulla Yiasouma summarized the violence as child abuse and last week, her office published a call to action to address the criminal exploitation of young people.

At the time, other commentators were quick to provide explanations for the violence. Several pointed to Brexit. That appeared to be a reasonable hypothesis, particularly as social media was peppered by hastags such as ‘no border in the Irish sea’ and elected representatives claimed a constitutional crisis. The divorce deal it was alleged, provided a spark to the tinder.

Another suggestion was that the riots were coordinated in response to Public Prosecution Service decision not to recommend prosecution following the alleged breaches of Covid-19 regulations when senior Sinn Fein party leaders attended en-masse, the funeral of veteran republican Bobby Storey.

But how close are these explanations to the truth and to what extent can they help us understand how such events could be prevented?

In a study undertaken with Prof. Maruna (SSESW) we interviewed young people who lived in those areas that experienced the violence and explored the push and pull factors to understand why some were motivated to join, and others avoided the violence. We found that the majority were less motivated by politics than they were by fear and the frustration. As one young man tried to explain, “It came about because, I don’t know, but it’s something to do, see to be honest, and I couldn’t really tell you much about the Irish Sea border…”. Another said that they had only heard anything about the border issue the day after the riots.  Despite being unable to explain the detail, many believed that their communities faced an existential crisis.

Like the riots in London a decade ago, or indeed the riots that took place across the United States, France, Poland and Hong Kong during 2021, participants in the Spring riots were less deterred by the threat of harm or arrest, than they were motivated by the fears of what they feel is happening in their own communities. Fear can be a ferocious motivator, and there was evidence of concerted efforts to spread fear among the Protestant, unionist and loyalist community over the past year. Our research makes clear that most young people were unaware of the nuances of European Union (Withdrawal Agreement) 2020 Act, or the detail of the Public Prosecution Service decision in the wake of the Storey funeral. At the same time, participants felt an acute sense of persecution and hostility toward police authorities that could be mobilized by paramilitary groups with more directly political motives. Several of the young people we spoke to said that paramilitary recruitment and exploitation remain rife in these communities.

The Tackling Paramiliatarism Programme (TPP) is helping to develop novel but evidence-informed responses at a local level. Organisations funded under the programme are finding that in the communities that are most affected by paramilitarism. In one programme led by the Education Authority, 92% of the young people indicated that they have experienced some form of violence, 51% have been threatened and 24% have been attacked by paramilitaries.  Paramilitaries continue to exploit those who fear for themselves and their communities. Young men in particular, influenced by ideals of what it means to be male, are driven to ‘perform’ in ways that demonstrate their masculinity (bravery, strength and stoicism). One young man who took part in the riots said:  “It’s just more of a men thing like. … Like you can’t, like in this community you would probably get mocked for not, like, not doing something”. By demonstrating a willingness to engage in ‘justified’ violence, young men can show their bravery and their commitment to community. Those unwilling to engage in such ritualised violence can be ostracized by their peers and threatened by paramilitaries.

So what if anything can we learn from social science that could help us prevent community violence? It is clearly not easy given all the influences at play. But social scientific evidence provides hope that the lives of young people in such communities can be improved by identifying those most at risk of exploitation and providing them with supports that could reduce their risk of harm. Many of those most vulnerable have experienced significant trauma and are often victims of violence themselves. In the first study of its kind in NI, we reported earlier this year that violent victimization increased the risk of violent offences by 9 times. Further, evidence of paramilitary threat was associated with more serious violent offending. Despite the evidence that trauma symptoms can be reduced with appropriate screening and treatment, the needs of the most vulnerable young people are often overlooked. Instead, these young people are themselves criminalised in a process that can replicate and exacerbate trauma rather than addressing it.

Stephen Hughes, a youth worker from West Belfast as well as Dr Phil Anderson, a consultant physiatrist have been calling for a violence prevention strategy and implementation of a public health approach for several years. In an article published in Youth and Policy earlier this year, Walsh (2021) outlined a model called Common Purpose that could go some way to achieving it. Indeed, when it was applied in Derry in 2019/2020, the model contributed to a 50% reduction in antisocial behaviour, a 94% reduction in petrol bombs and 100% reduction in attenuated energy projectiles (AEPs) used by the police.

Yet, a public health approach requires political will and a joined up effort across the Executive. In early July, an ‘ARK’ policy roundtable event was held, with experts from academia, policy, practice as well as from communities in attendance. We met to discuss the issue of youth and community violence, and the harm that it causes. One of the recommendations that emerged from the roundtable was for coherent coordination across government departments such as the role of health and social care. Likewise, the Children’s Commissioner’s briefing concluded that “…the consistent and active presence of safeguarding agencies and children’s social care (identified as having a key role in partnership working elsewhere) is less clear”. In other words, despite the success of the TPP work and other academic, policy, practice partnerships, much work is still required to join up prevention efforts.

Violence is complex. Collective violence like we saw in April even more so. The factors that drive it are both localized as well as generalized. However, social science tells us that the mechanisms can be understood and when combined with policy and practice efforts, they can have a positive effect. The TPP is one example of how public health approaches, if brought to scale, could reduce violence and improve outcomes for communities. There is a way but is there a will?

This article originally appeared in the Belfast Telegraph.

Dr Colm Walsh is a criminologist and researcher in the SSESW. Along with Professor Shadd Maruna, he is engaged in research around youth violence, psychological trauma and the criminal exploitation of young people.

The featured image has been used courtesy of a Creative Commons license. By Michael and Daphne Oliver and Jost on Flickr.