Closer inspection of polling trends shows voters are even less favourably disposed to congressional Republicans than they are of the president and his actions says Dr Christopher Raymond. 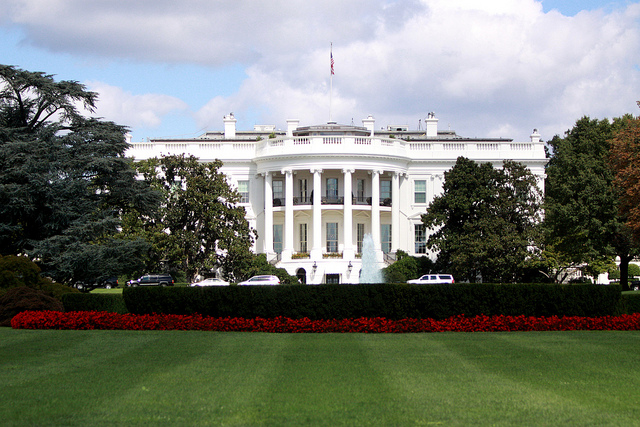 As Republicans continue to trail Democrats in polls of voters’ intended vote in November’s election to the House of Representatives, the prospect of Democrats regaining control of the House of Representatives remains likelier than not.  While Republican members of Congress continue to campaign to save their jobs, some Republican critics of the president have already begun preparing for the fallout from their party’s anticipated defeat and the internal struggles over the future direction of the party.  Pointing to continued low presidential approval ratings, these critics seek to wrest control of the party’s agenda back from the president.  However, closer inspection of some recent polling trends suggests voters are even less favourably disposed to congressional Republicans than they are of the president and his actions.

Trends in Polling on Support for Republicans

Republicans remain in a difficult situation if they want to retain control of the House of Representatives.  No poll of voters’ intended voting behaviour in the November election reported on RealClearPolitics.com (which collects information from most polls conducted by reputable survey firms) since Trump’s inauguration has shown the Democrats to be in the lead (though a handful have shown a tie between Democrats and the Republicans). 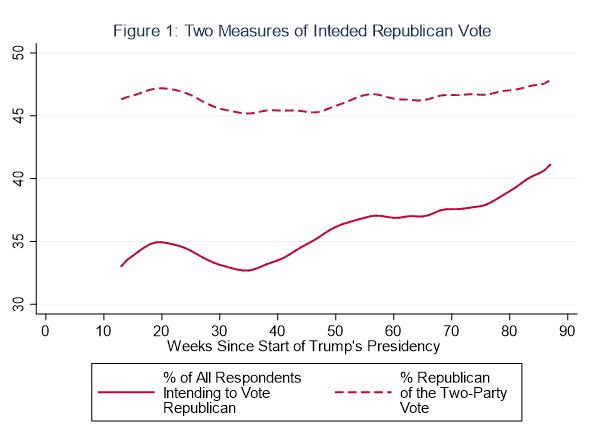 We can see evidence of the trouble facing Republicans in Figure 1.  Using data from the weekly Economist/YouGov polls conducted since mid-April 2017 (the first polls in which they began asking questions about voters’ intended vote choice for the House of Representatives), we see that while the percentage of all respondents indicating they will vote Republican has increased over time, the share of respondents saying they will vote Republican relative to the share of respondents intending to vote Democrat has not improved appreciably over time.  As seen in Figure 1, and consistent with nearly every other poll, the Republican share of the hypothetical two-party vote remains well below 50 percent.  While the Economist/YouGov data suggest it is possible (the margins of error in these polls mean the two parties’ vote shares could be identical), the fact the Republicans are consistently behind, poll after poll, suggests this deficit is real.

Comparing Democrats and Republicans in terms of how favourably Americans view each party as a generic party label (combining very and somewhat favourable views), Figure 2 shows that while the two parties were viewed roughly equally by Americans at the start of Trump’s presidency, feelings towards the two parties have diverged.  While favourable attitudes towards the Democrats have remained stable throughout the Trump presidency, the percentage of Americans holding favourable views of the Republicans sunk considerably during the first year of Trump’s presidency and has not recovered since then. 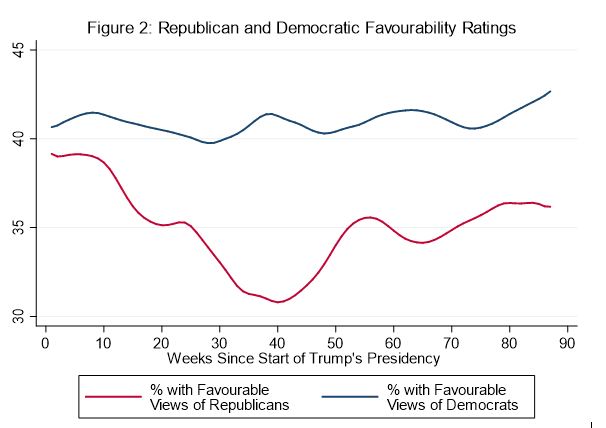 However unpopular Trump may be, the view that he is solely or even primarily responsible for the Republicans’ weak poll numbers should not be taken for granted.  There is actually reason to believe the situation Republicans face vis-à-vis the House of Representatives is due (even) more to their own making than Trump’s actions.  For one, there is the fact that several polls have shown that overwhelming majorities of Republicans hold favourable views of Trump’s presidency—while their views of congressional Republicans (which includes many of Trump’s strongest Republican critics) lag considerably.  Although Trump’s myriad controversial actions have likely hurt the Republican Party among people who think of themselves as Independents, there is reason to believe that much of this damage has been self-inflicted: Republicans in Congress have not accomplished much in the eyes of voters, failing to enact much of the agenda they had promised for several election cycles, which includes many issues like healthcare that are increasingly viewed as top issues among voters. 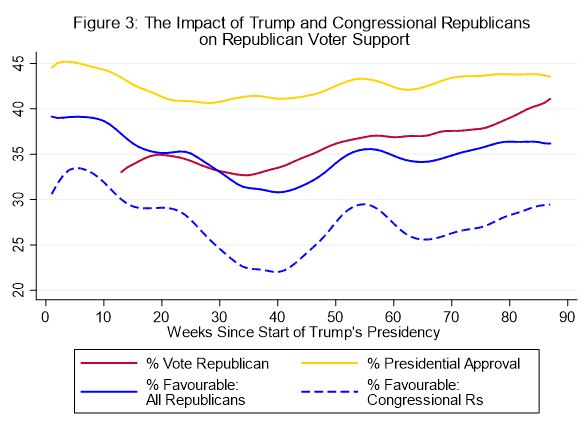