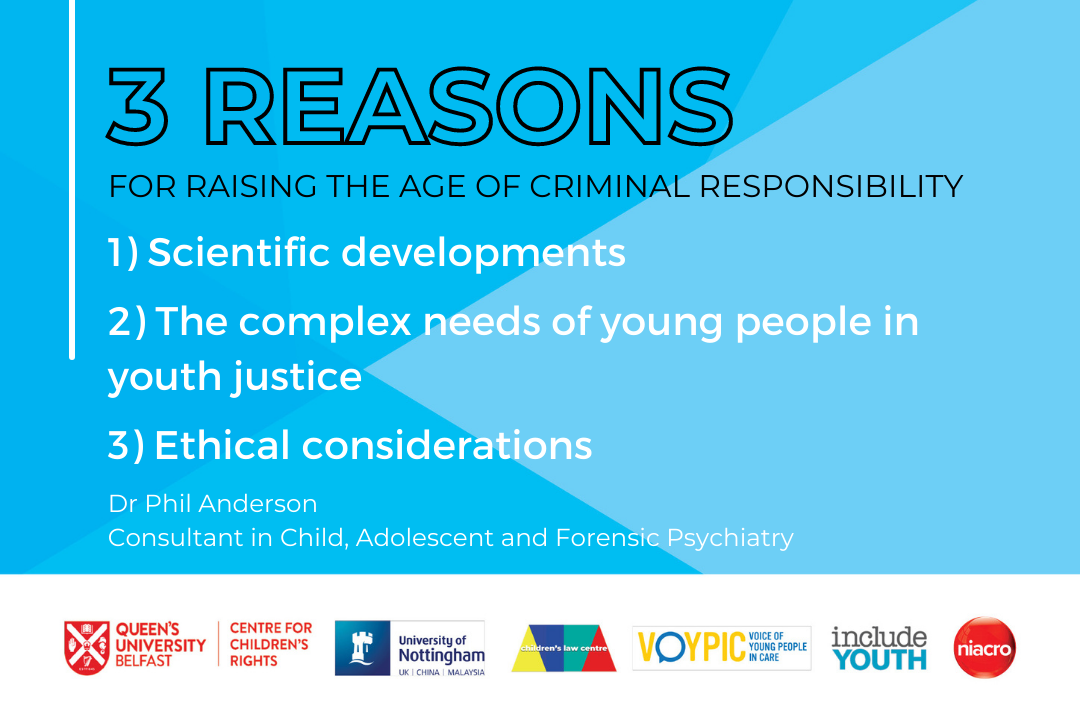 The age of criminal responsibility in Northern Ireland is 10 years old. It remains one of the lowest in Europe and around the world. The Children’s Law Centre, Include Youth, NIACRO and VOYPIC are calling for the age to be raised to 16 in line with UN recommendations.

The Minimum Age of Criminal Responsibility [MACR] is the lowest age at which a child is deemed to have the capacity to commit a criminal offence. Northern Ireland, England and Wales sit in notoriety as having the lowest MACR in Europe, at a mere ten years old. This means a ten year old child would be regarded as indistinguishable from an adult when being charged and tried for criminal offences.

This ‘un-lofty’ position is in spite of the considerable pressure of international human rights standards. For example, the United Nations Committee on the Rights of the Child [UNCRC], considers any limit below the age of 12 years as being ‘unacceptable’.

Furthermore, since the 1990s, the UNCRC has recommended on multiple occasions that the UK needs to increase its MACR.

In this blog post, I will explore what I believe are the following three key reasons for raising the MACR limit in Northern Ireland;

There have been significant advances in our understanding of adolescent brain development, over the last thirty years. This is partially attributable to the development of new brain imaging techniques, such as Magnetic Resonance Imaging [MRI].

Historically, the scientific consensus was that the first eight years of childhood, were the most critical period of brain development, after which there was relatively limited further development. However, the current scientific consensus is that there is a second period of substantial brain development in adolescence; this is a complex process that starts at the onset of puberty and continues into the mid-twenties.

These changes in the adolescent brain are readily visible on MRI with significant changes in the grey and white matter components of the brain. MRI scans also demonstrate that the activation of brain regions significantly differs between adolescents and adults, when they are completing the same tasks. Furthermore, the adolescent brain is now recognised to be highly plastic and having substantial relative capacity for positive change with consistent and well targeted interventions.

A brief summary of the implications of these adolescent brain changes include a substantial predisposition towards;

The relevance of these brain findings to youth justice is that the adolescent population is demonstrably and substantially different to the adult population. Legislative approaches to issues, such as MACR, needs to reflect the current scientific understanding of the brain

2. The Complex Needs of Young Persons in Youth Justice

Young persons involved with the youth justice system are recognised to have very high rates of complex needs, which are often undiagnosed and poorly understood. A young person with complex needs has two or more needs affecting their mental, emotional, physical or social well­ being. Such needs typically are severe, interact and difficult to manage.

There is an abundance of scientific research regarding the very high rates of complex needs of young persons in the youth justice system;

The complex needs of these young persons need to be met through health and social care responses, rather than through criminal justice.

Related to this, the Stormont Executive is yet to fully embrace the public health approaches to youth violence, notably developed in Scotland, which have achieved substantial reductions in violent offending.

The issue of how to legislate for young person’s emerging capacity is complex and has been subject to significant debate over the last 30 years.

Over this period, there has arisen a substantial legislative disconnect in Northern Ireland between the lowest ages we recognise that young persons have the capacity for criminal decision-making [ten years] versus health and social decision-making [14 – 16 years].

From an ethical perspective, it seems ridiculous that a young person must be at least 14 years old to make a decision about being prescribed the oral contraceptive pill but could be held responsible for the criminal offence of theft.

Notwithstanding, the decision-making of a young person regarding a serious health issue is likely to be made with support from qualified professionals, communicated in an appropriate manner, with adequate time and within the correct environment. Whereas, criminal decision­ making is typically made by young persons with unmet complex needs, in an impulsive manner, negatively influenced by peers and illicit substances.

The UNCRC [1989] requires that domestic laws are developed ‘in a manner consistent’ with the emerging capacities of the child’. However, Dr Alexandra Lewis of the Royal College of Psychiatrists [RCPSYCH] communicated in written evidence to the Justice Select Committee in 2020 that the legislation governing MACR in Northern Ireland is ‘incompatible’ with the current scientific understanding of brain function and ‘the challenges facing children due to their developmental immaturity’.

A low MACR that seeks criminal justice solutions to what are health and social care issues, impacts all of us, by consolidating vulnerable children with complex needs into the justice system. Whilst research indicates that the criminalisation of children has a tendency to increase rather than reduce their offending behaviour [McAra, 2007].

Northern Ireland is increasingly ‘beyond the pale’ with respect to its extremely low MACR. This limit is completely out of line with international rights standards, other European countries and the overwhelming scientific consensus of the differences between the adolescent and adult brains.

The legislative disconnect between the lowest ages we recognise that young persons have the capacity for criminal decision-making versus health and social care decision-making is neither ethical nor just. I strongly recommend the Northern Ireland Executive to urgently review these issues and consider a co-ordinated approach across capacity legislation [health, social, criminal] towards a unified age of capacity.

Furthermore, I strongly recommend the Northern Ireland Executive needs to fully recognise the complex needs of young persons involved with youth justice. It needs to fully adopt a public health approach to youth violence, as developed by the Violence Reduction Unit [VRU] Scotland, which has achieved reduction in violence crime by more than 35% and a reduction in homicide rates by 2/3.

Dr Phil Anderson is a Consultant Psychiatrist in Child and Adolescent Mental Health with the Belfast Health and Social Care Trust.