Militia and criminal groups in Colombia, excluded from previous peace agreements, have called a ceasefire. The new President Gustavo Petro has vowed to pursue “total peace” with these groups. 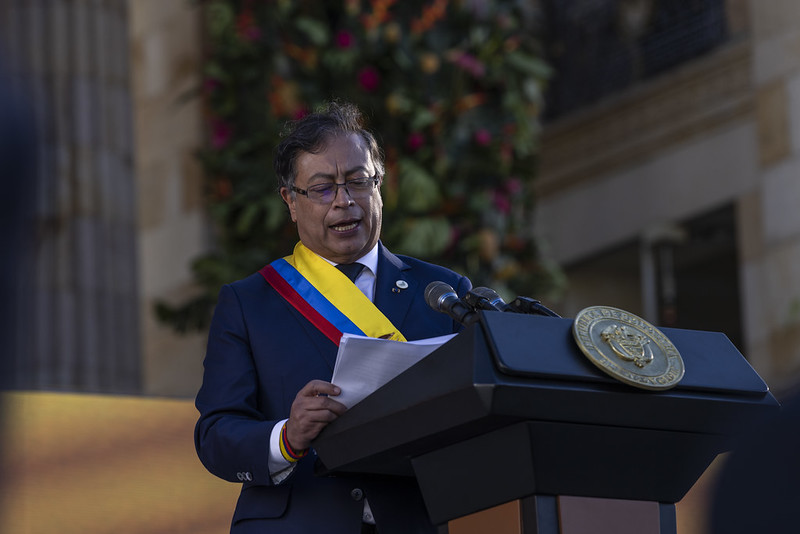 Various militia and criminal groups including the Clan del Golfo (also known as the Autodefensas Gaitanistas de Colombia – AGC), currently the most powerful drug-trafficking militia, announced a unilateral ceasefire and called on the Colombian government to engage in peace negotiations.

This comes at an important juncture for Colombia. In 2016 the Colombian government signed a comprehensive peace agreement with the country’s largest communist insurgency, the FARC (Fuerzas Armadas Revolucionarias de Colombia).  While this peace deal included a series of measures to address the roots of the decades-long conflict, it excluded other armed groups such as the ELN (Ejercito de Liberacion Nacional), a smaller communist insurgent group, and a variety of militia organizations and criminal groups, such as the Clan del Golfo. These armed groups have remained active and perpetrated many human rights abuses.  However, now the new leftist President Gustavo Petro (sworn in 8th of August 2022) has vowed to pursue “total peace” with remaining rebel groups, militias, and criminal organizations. He has already promised to re-open talks with the ELN, which were suspended in 2019 after the ELN bombed a police academy in the capital city of Bogota. The call for renewed negotiations by the Clan del Golfo might offer a way towards a more peaceful Colombia.

Recent research has shown that negotiations with criminal organizations look very different to dialogues with insurgents. Since militias and criminal groups do not directly challenge government authority like insurgents do and are usually more motivated by financial gain than changing political systems, negotiations and agreements with such non-state armed groups are often more limited and fractured compared to those with insurgents.  Yet, the Colombian government has experience negotiating with the AUC (Autodefensas Unidas de Colombia), an umbrella pro-government militia and drug-trafficking organization prominent in the early 2000s. This led to a demobilization program between 2005-2006 and measures to address victims of the conflict.  So, what can Colombia’s experience with negotiating with militias and criminal groups teach us about potential future government negotiations with the Clan del Golfo and other factions?

Colombia faces challenges dealing with armed groups that have continued activities beyond the 2016 government-FARC agreement.  While the newly inaugurated government of Gustavo Petro has promised to re-open dialogue with the ELN, there is currently less certainty that it will do so with the various militia and criminal groups that are still operational.  If the government decides to proceed with negotiations with militia and criminal groups, such as the Clan del Golfo, the government’s 2003 negotiations with the AUC provide a hint at what potential discussions might look like.  Negotiations are likely to remain secretive and limited in scope, primarily focusing on the conditions for demobilization. On the one hand, there is some potential optimism for providing new solutions to drug-trafficking. But on the other hand, the negotiations are likely to be fraught with “spoilers” and defiance among those that seek to continue their lucrative drug-trafficking activities. Finally, even if an agreement can be reached, previous experience tells us that implementation can be difficult.  Even if dialogue does occur, there will still be a lot of work to reach “total peace”.

Dr Andrew Thomson is a Senior Lecturer in the School of History, Anthropology, Philosophy and Politics at Queen's University Belfast. His research interests include conflict, peace processes, US foreign policy, and non-state actors in civil war.

How we Understand Conflict Prevention Shapes our Ability to Prevent