Sharing and caring for things for a Sustainable Economy

In this special long read, Professor John Barry looks at the quietly revolutionary potential of tool libraries and repair cafes to pioneer a new sustainable economy. 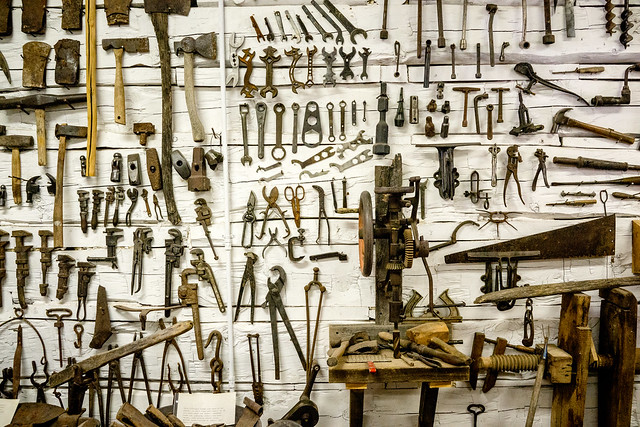 For years I have been talking about the ‘revolutionary’ character of libraries in modern societies.  In public talks (most recently at a panel discussion at the Feile) and in my academic work I have promoted the radical implications of using things without owning them and how libraries are part of an old-new sharing and caring economy, which is also a less unsustainable one. Now there are two words you do not normally see together!

Libraries are rarely seen as revolutionary and the stereotypical image we have of them as quiet places of reading and reflection seem far removed from the noise, energy and excitement of revolution.  Yet think about it for a moment; libraries offer a very different way of meeting needs than the dominant model of purchasing goods and services.  Hold your breath, libraries are (alongside two other ‘Ls’, light-rail and laundromats) forms of ‘socialised consumption’, where for no or very low cost we can have use of things.

In separating out use and enjoyment from ownership, libraries and the principles behind them, are harbingers of a new green, sustainable economy in my view.  They disrupt the commonsense view of people having to purchase and own (with money from paid employment, pensions or benefits etc.) things (we mostly think of books, but as we will see below the library sharing model can extend well beyond books).  Which is why we should all defend and seek to expand our existing libraries and welcome the news of Belfast’s and the island of Ireland’s first Tool Library due to launch in the coming months.  But more of this below.  I want to outline some of the political economy, cultural and historical dimensions of the ‘sharing and caring economy’ within which we can place libraries, and related initiatives such as repair cafes.

One of the deep historical roots of the library and its separation of ownership and use is a strange term ‘usufruct’ (best said sober in my experience!).   The holder of a usufruct, known as a usufructuary, has the right to use (usus) the property or asset (which they usually do not own) and enjoy its fruits (fructus) or simply use the asset or its fruits.

The most famous example of this is the rights of ‘commoners’ in English civil law, where peasant commoners had customary and legally enforceable rights to the fruits of lands and property owned by others such as landlords or aristocrats.  Such commons rights included Pasturage –  the right to graze domestic stock; Estovers – deriving from a French word meaning necessary, a right of estover conferred the ability to take limbs of timber for minor works to buildings, and as deadwood for fuel, or to take bracken and heather for bedding; Turbary – a common right to cut peat or turfs for fuel; Pannage – the right to graze pigs in woodlands in autumn; Common in the Soil – this is a general term used for rights to extract minerals such as snads, gravels, marl, walling stone and lime from common land, and Piscary – the right to fish.  So when you borrow a book you are part of a long and ancient non-market system of meeting needs….who knew?!!

And to finish this historical point, the enclosure movement of the 18th century, where common land was privatised, i.e. enclosed for private not public or common use and enjoyment, stands for a diametrically opposite logic to that of libraries.  While vigorously opposed by peasants and commoners across England and Scotland, the state–backed enclosure movement succeeded and was a key precondition for the emergence of the political economic system we know as capitalism.  An 18th century anti-enclosure poem nicely captures what was and still is at stake in defending the commons and a sharing economy.

The law demands that we atone
When we take things we do not own
But leaves the lords and ladies fine
Who takes things that are yours and mine.

The poor and wretched don’t escape
If they conspire the law to break;
This must be so but they endure
Those who conspire to make the law.

The law locks up the man or woman
Who steals the goose from off the common
And geese will still a common lack
Till they go and steal it back.”

The usufruct origins of modern libraries (that is where for free or very low cost any citizen can have use of the resources of the library) thus raises another ‘revolutionary’ dimension of libraries – the idea of the commons.  The commons, (the origin of the ‘House of Commons’ in the UK Parliamentary system)  can be defined as a resource or asset that is either commonly owned or managed, and/or of common interest to all i.e. something everyone needs – water, education, health, breathable air.

The commons expresses a very old idea—that some forms of wealth and productive capacities of assets to meet human needs belong to all of us, and that these community resources must be actively protected and managed for the good of all. It is from such ideas of the commons that we get terms such as the ‘common good’ and ‘commonwealth’ for example.  The commons are the things that we inherit and create jointly, and that will (hopefully) last for generations to come. The commons consists of things like free gifts of nature such as clean air, life-sustaining oceans, life supporting ecosystems and its entities, as well as shared social creations such as libraries, public spaces, public health care, scientific research, education, culture and creative works. So the opening of Belfast’s and Ireland’s Tool Library is a big deal, not only providing a much needed service to the citizens of the city but also providing a real world example that ‘anther economy is possible’ and one with a deep history.

Repairing things is clearly different from borrowing, using and returning thinks for others to similarly use.  But repairing things shares a related disruptive logic to libraries – it directly challenges the ‘take, make and throwaway’ linear pattern of the modern unsustainable economy.  By deliberatively seeking to extend the life or a product, it disrupts the imperative for more stuff to be produced (which we witness as ‘economic growth’ and consumerism).  As the US retail analyst, Victor Lebow noted in 1955 (yes 1955),

“Our enormously productive economy demands that we make consumption our way of life, that we convert the buying and use of goods into rituals, that we seek our spiritual satisfaction and our ego satisfaction in consumption. We need things consumed, burned up, worn out, replaced and discarded at an ever-increasing rate.”

Not only is the utter ecological unsustainability of the modern economy based on its structural dependence on fossil fuels, but a modern capitalist economy requires the ‘engine’ of consumerism to ‘grow and go’.  Hence consumerism is intimately connected to advertising and marketing, that is the deliberative and planned promotion and continual expansion of desires and wants which we did not know we had.  Or to quote from the film, Fight Club, “Advertising has us chasing cars and clothes, working jobs we hate so we can buy s*** we don’t need”.  And here we can see how both repairing things and borrowing and using rather than purchasing and owning them, directly challenge that consumer expansionist growth logic.

I see one of the distinctive features of repairing things (as opposed to discarding and replacing them) as a form of practical care and indeed personal narrative.  By care I mean bringing something for repair is a form of caring for a material object, and this is often (but not of course always) connected with the item being repaired being connected to a personal narrative. What I mean by this is that we make a mistake in condemning as ‘materialistic’ peoples’ attachments to things (cars, jewellery, clothes, TVs etc.).  Social initiatives like the Repair Café allow us to see that people are often connected to things that they can ‘tell a story about’, or are otherwise connected to their identities and aspirations.

Repairing an item can denote the importance of that material object to us, as well as providing a cheaper way to continue getting the use of the object rather than buying a new one.  Repairing something is, as a form of care, an indication of a more healthy relationship between humans and things, than the one we see in consumerism (where we don’t really care about things at all and form no deep connection with them). Again, like libraries, repair cafes point to the importance of use, but unlike libraries these remain our private possessions, but now we’ve extended their lives as opposed to the circle of people who use them.

Apart from these disruptive, radical origins and effects, an important shared feature of both libraries and repair cafes is that they bring people together and create networks and community where neither may have existed before.  This ‘Brucie bonus’ is yet another reason for celebrating and supporting them.

And whether you buy into or support a library or repair café for the reasons above, of just see them as an excellent low cost way of meeting your needs, having some craic and meeting new people, the main thing is to get involved in them.  After all, there are many reasons for doing the right things.  They have multiple positive benefits that are needed now more than ever and stand as forms of social innovation to complement the technological innovation we need and will need in the years and decades ahead as we figure out how to create an economy that meets peoples’ needs and does not wreck the planet or force people to engage in forms of ‘wage slavery’ to buy stuff they don’t need, and focus on meeting the real needs of our people.

So watch out for and support the soon to be launched Belfast Tool Library and the up and running Belfast Repair Café.  In doing so you’re connecting with brilliant grassroots initiatives, other people and a deep and gently radical past.

Green space – how much is enough, and what’s the best way to deliver it?