The rise in Elizabeth Warren's poll numbers has reached the point where some are starting to wonder if she is the candidate to beat for the nomination. Dr Christopher D. Raymond explores the polling data. 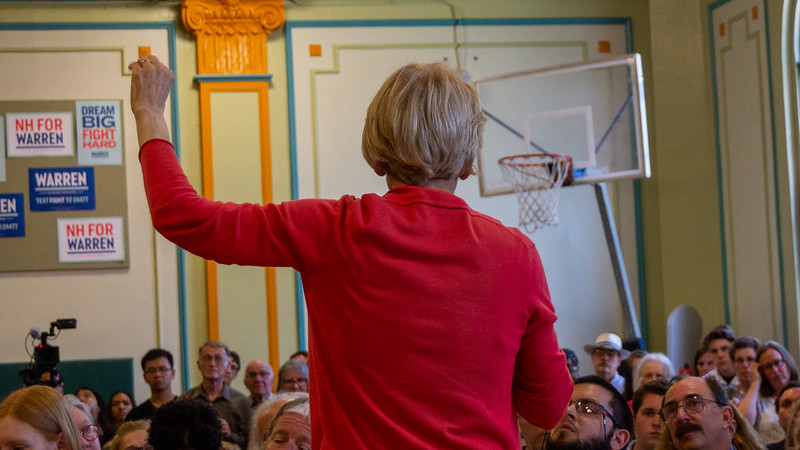 Senator Elizabeth Warren’s campaign for the Democratic Party nomination looked like a long-shot at the start of the year.  Over the last several months, however, Warren has distinguished herself from the rest of the crowded field of candidates in part due to a bevy of policy proposals, such as a wealth tax, forgiving student loans, and breaking up large tech corporations (among many others).  While former Vice President Joe Biden’s campaign has sustained scrutiny for months, Warren’s campaign has managed to deflect similar scrutiny.  The rise in her poll numbers has reached the point where some are starting to wonder if she is the candidate to beat for the nomination.

Is Warren in the Lead?

While Warren’s rise is unmistakable, disagreement remains regarding the degree of Warren’s momentum.  Taking the six most recent national polls surveying potential Democratic primary voters’ preferences (as of the time of this writing), Figure 1 shows that three polls place Warren in the lead, while three continue to place Biden in the lead.  Thus, while we should be careful in declaring Warren to be in the lead, there is growing evidence the race between Warren and Biden is tightening. 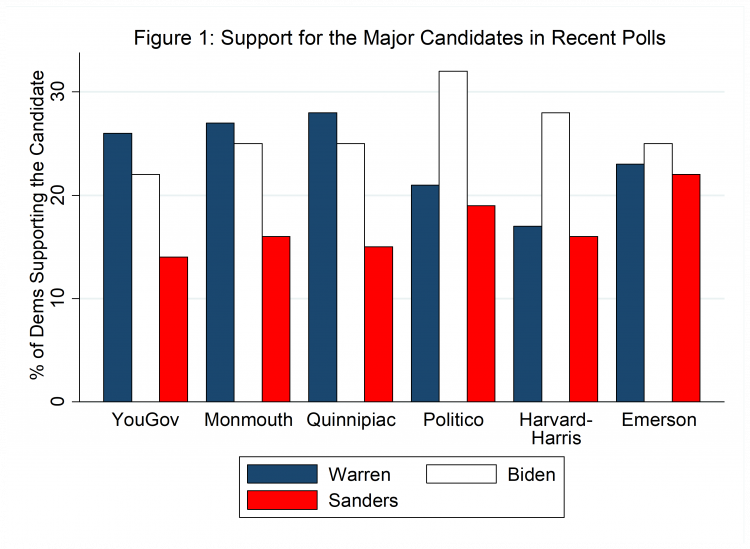 One should also note that the same polling companies showing Warren in the lead in Figure 1 have shown Warren doing better in earlier polls than other polling companies.  That said, it is clear from the last several polls that Warren’s support is trending upward, even if the race remains dominated by the same three candidates (Biden, Warren, and Bernie Sanders) as has been the case for months.

Social Divisions Within the Party Explaining These Trends

Warren’s improvement in the polls reveals some crystallization of the three main candidates’ social bases of support among potential Democratic primary voters.  This can be seen in three of the most recent polls that break down the results by respondents’ backgrounds.  Regarding divisions among voters’ racial/ethnic identities, Figure 2 shows that Biden continues to enjoy considerable support among ethnic minority voters, particularly black voters (as seen in the data provided by the YouGov and Monmouth surveys), who constitute one of the largest constituencies within the Democratic primary electorate.  Warren’s support, by contrast, is rooted much more firmly among white voters. 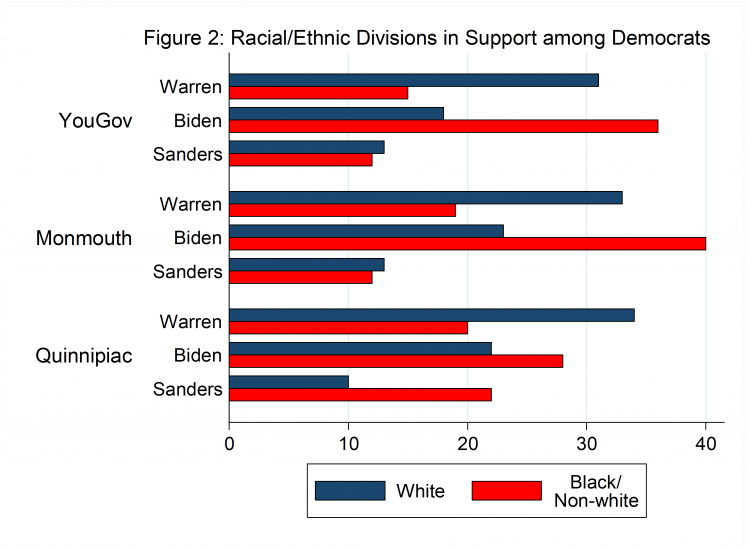 We also see that Warren’s support is distinct in terms of voters’ educational attainment.  Whether looking at the Quinnipiac data (including only white voters) or the Monmouth data (including all voters), Figure 4 shows that while Biden and Sanders support is rooted more strongly among voters without a university degree, Warren’s support comes disproportionately from voters having completed a university degree.

As more candidates drop out of the race, we can expect these patterns of support to persist and perhaps intensify.  Because Warren has managed to attract a base of support from educated, white, upper middle-class voters, the departure of candidates with similar bases of support to Warren will result in those supporters likely coalescing around Warren.  While Biden and Sanders have tried (and will continue to try) to expand their social-group bases of support, the differences in policy preferences between the different constituencies each candidate has attracted will make such appeals difficult to achieve. 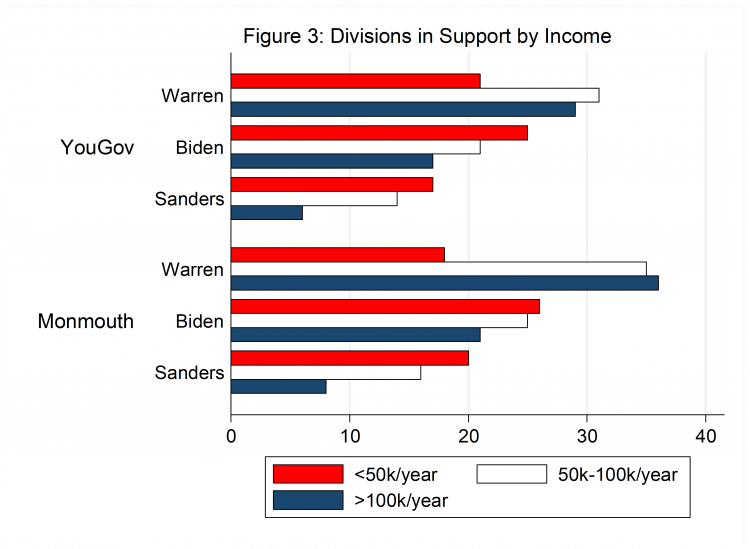 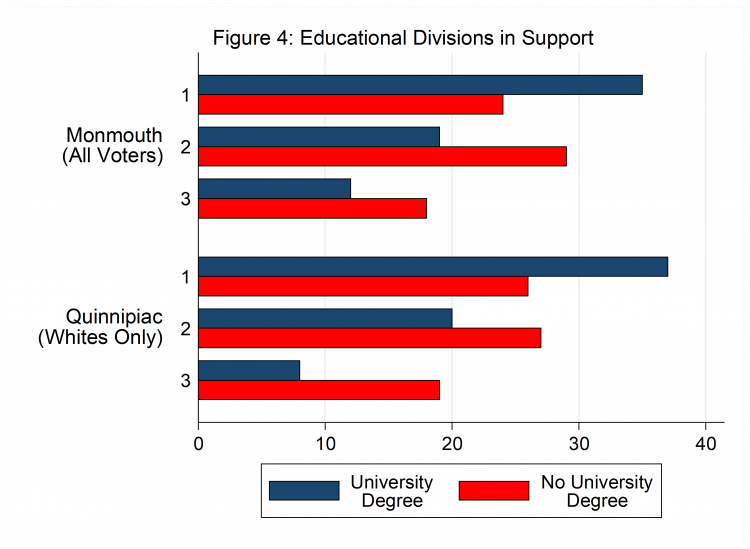 One other feature favouring Warren’s momentum is the fact that she is well-liked by the Democratic primary electorate at large.  Quinnipiac asked respondents whether they would be excited or not excited should each candidate be nominated by the Democrats to run in November 2020.  Figure 5 shows that while significant minorities (a third to nearly 40 per cent of Democratic supporters) would not be excited were Biden or Sanders nominated, 70 per cent of Democrats would be excited by a Warren candidacy—with far fewer disappointed by her candidacy.  The fact that a Warren candidacy excites Democrats from all social groups suggests that, despite differences in the major candidates’ social-group bases of support, she has the potential to unite the party for the general election better than the other remaining candidates. 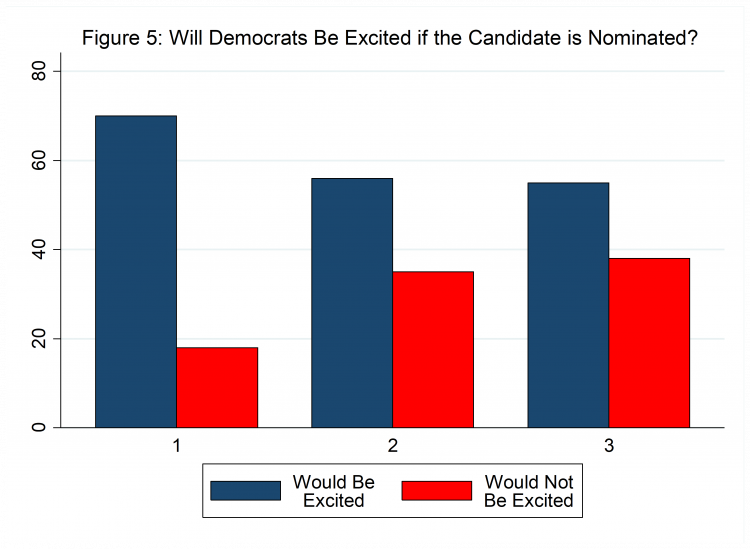 How Will the Other Candidates Respond?

Because others are starting to recognise Warren’s momentum and (increasingly likely) path to the nomination, we can expect the remaining candidates in the race to respond by increasing their scrutiny of Warren and many of her policy proposals.  The Sanders campaign has already started to criticise Warren (although not by name) for not being forthcoming with the fact her spending proposals will require the average American to pay higher taxes; we can expect this line of criticism to increase given the considerable overlap in these two candidates’ policy proposals.  We can also expect that Sanders, Biden, and the less well-known candidates to focus more of their criticism on Warren and her policies in the next Democratic debate on 15 October, though whether any of these efforts will slow Warren’s momentum remains to be seen.

A Word from our experts: What the US election result means for the US economy

Americans Head to the Polls Holding their Noses

Primarily Dysfunctional: The 2016 US Presidential primaries are firmly underway