Dr Peter McLoughlin looks at what a Tory-DUP deal could mean for the Conservatives, the Democratic Unionist Party itself and for Northern Ireland. 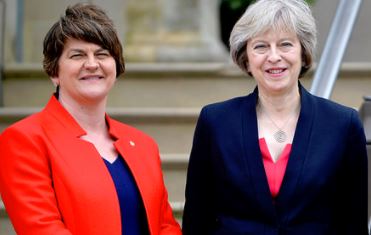 The website of the Democratic Unionist Party (DUP) crashed amid a surge of interest in the Northern Irish party. “DUP” was also one of the most searched terms on Google as the party emerged as kingmakers whose ten seats at Westminster could help the Conservatives hold onto power after Theresa May’s party lost its overall majority. But the DUP will drive a hard bargain.

Before announcing that her party would explore a deal with the Conservatives, DUP leader Arlene Foster had already suggested that it would be “difficult” for May to remain as Tory leader. Yet standing on the steps of 10 Downing Street, May showed no signs that she was planning to resign. Foster’s comments may be just part of a pre-negotiating strategy. Subsequently showing “flexibility” on the Tory leadership issue – about which the DUP likely care little – would allow the party to extract concessions elsewhere, which is probably their real intent.

Primarily they will be aiming for lots of “goodies” for Northern Ireland – including economic and particularly infrastructure investment, and additional support for seriously stretched healthcare services.

This would obviously allow the DUP to show its own supporters what they had gained for Northern Ireland. It is also a deal that the Tories could easily sell to its heartlands, by working with a party very similar to its own in attitude to the union, its economic philosophy, and its preparedness to countenance even a hard Brexit. Despite May’s obvious misjudgment in calling a snap election, she might still be able to claim the “strong and stable” government she said she was seeking in advance of the Brexit negotiations.

However, the implications of such a deal for the UK, Brexit, and particularly for Northern Ireland, may all be less rosy. Even with DUP support, May (or any alternative leader), still has a slimmer majority than the one with which the Tories entered the election. The Conservative leader would still have to deal with zealously anti-European Tory backbenchers who are likely to cause problems in the difficult Brexit talks ahead. Indeed, their numbers would be boosted by some similarly “uber-patriotic” Britishness from the DUP ranks.

This defeats what was surely the underlying aim of May’s bid for an increased majority: the room for manoeuvre and the ability to compromise in EU talks, without being held hostage by a few backbench rebels. May’s more obvious aim, to weaken the political opposition on the other side of the Commons, has also been defeated. A remarkable campaign by Jeremy Corbyn, clearly aided by a surging youth vote, produced a stronger and newly energised Labour party that will harry any Tory-led government through the challenges ahead. Good for democracy, certainly – but for stability and a workable Brexit deal, less so.

While Northern Ireland might get some shiny new motorways and more much-needed GPs, there are serious political implications to a Tory-DUP deal. The DUP vote has risen, but so has Sinn Féin’s. Together, they now hold all but one seat in Northern Ireland. This reflects the continued electoral polarisation of the region in recent months, which has now seen the moderate SDLP and UUP wholly wiped from the political map.

This does not bode well for the difficult talks and compromise that are also necessary in Northern Ireland if it is to restore the recently collapsed local power-sharing arrangements.

A DUP deal at Westminster, where Sinn Féin refuse to take their seats, will facilitate a Brexit deal which could have huge ramifications for the Irish border. Sinn Féin and other nationalists want “special case” status for Northern Ireland in the Brexit talks – some way of keeping it in the single European market, thus avoiding a customs border in Ireland, and the potentially disastrous effects that would have for economies North and South.

Such a deal would effectively involve moving the border to the Irish sea. Economic and other controls would then exist between Northern Ireland and Great Britain, with the possibility of Ulster unionists requiring passports to travel to Scotland and England. Such decoupling of the UK and Northern Ireland is why the DUP have opposed Sinn Féin’s line on Europe, even if Northern Ireland’s departure from the European trading bloc could have terrible effects for their own supporters, particularly those in farming and border communities.

While the DUP might enjoy the prestige and new power that comes with any Westminster deal, and take delight in defeating Sinn Féin’s line on Brexit, any strengthening of the Irish border as a result will only feed nationalist anger and backing for a referendum on Irish unity. So, while Sinn Féin may feign outrage at any DUP-Tory pact, they do so knowing it boosts support for their agenda. As ever, Sinn Féin and the DUP continue to enjoy a symbiotic relationship – each feeding off the other.

Dr Peter McLoughlin is a lecturer in the School of History, Anthropology, Philosophy and Politics at Queen's University Belfast. His research interests include Irish history and politics, with particular emphasis on British-Irish relations and the Northern Ireland problem.