The resignation of Martin McGuinness has prompted reactions ranging from accusations of political sabotage to speculation about his ailing health. Professor John Brewer examines what this means for Northern Ireland’s future, and whether the current power-sharing agreement that privileges the largest parties will be maintained, or if this will be the impetus for real change. 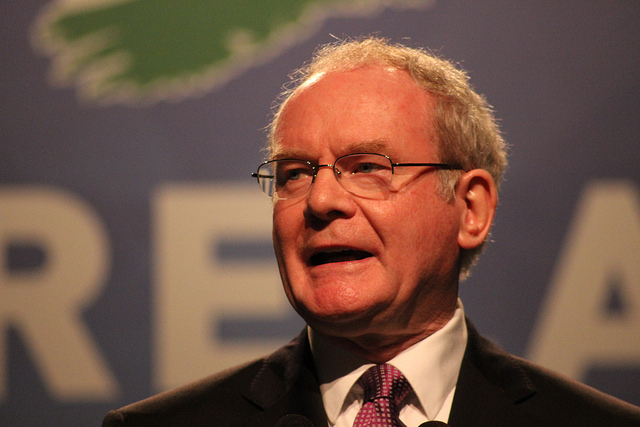 The resignation of Martin McGuinness as Deputy First Minister in Northern Ireland will not be as dramatic in its consequences as current predictions of political crisis suggest. The strains of sharing power between the two extremes of mainstream politics means predictions of crisis have become so routine as to be normal. The resignation will not be historic because very little will change because of it.

Martin McGuinness’s illness, which has witnessed a very rapid physical decline that has profoundly shocked people, has made commentary on his resignation something of a political obituary. History will be very generous to him; and rightly so.

Negotiated peace settlements the world over perforce offer incentives to militants to come and stay at the negotiating table, and there are countless examples of militants playing critical roles in nation re-building. The hand of friendship is extended to many former militants, willingly and eagerly shaken, despite the blood that was once on it. This is pragmatic politics. What matters is what militants became, not what they once were. The Mandela that came out of prison was quite different from the one that went in; and post-apartheid South Africa can be grateful for it.

McGuinness became an ardent peacemaker, one of the stalwarts that kept the power-sharing executive going during past scandals. He could have walked away many times in the past but his commitment to the peace settlement kept Stormont going, to the cost of his popularity amongst dissident Republicans. It won him respect from many Protestants and Unionists – after all Ian Paisley had made a similar journey to peacemaker – and eulogies from this community on his resignation had been fulsome.

McGuinness kept the Stormont Executive going so often in the past despite several allegations of financial corruption against Sinn Féin’s Democratic Unionist Party (DUP) partners in government that it is worth asking why resign on this occasion?

Commentators have inevitably looked to his health and the loss of energy to fighting for peace. Others have pointed to the specific allegations in this instance, which are more extensive in their alleged misuse of public funds, extending to half a billion pounds. The outcome of the May 2016 general election is also a factor.  Sinn Féin lost two seats – one in McGuinness’s heartland of Derry – to the left-wing alliance, People Before Profit, who were pushing working class austerity issues in a way that the DUP did not come under threat to its working class rivals in the Progressive Unionist Party. This has made Sinn Féin sensitive to the class interests of their electoral base; so financial mismanagement on this scale could not be ignored, especially when the ‘Ash For Cash’ scandal is said to have benefitted major businesses and large agri-industrialists and farmers. The DUP also have more at risk than Sinn Féin in an election given all the financial scandals.

There is some truth in all of this. But Sinn Féin also know that not much will change by McGuinness’s resignation. This is because the very institutional structures for power sharing in Northern Ireland will deliver the same result in any future election. There was little electoral risk and much to gain for Sinn Féin because of the way the power-sharing system works to the advantage of the two largest parties.

Northern Ireland’s political system does not share power but divides it. The largest party to emerge from within each community (and parties have to designate themselves as belonging to one or the other) get to divide up government ministries between them. There is no sense of governing for the whole of Northern Ireland, merely for ‘their’ community.

The ‘power-dividing’ system is dysfunctional but the largest party on each ‘side’ gains from it so long as they remain the largest party. This means that the main electoral battle in Northern Ireland is within each community. Sinn Féin have full confidence they will emerge as the largest Catholic-Nationalist party; they may even gain stronger command against their rival, the Social and Democratic Labour Party (SDLP) if the haemorrhage in the SDLP’s vote proceeds apace.

The power-dividing electoral system thus means that electioneering reverts back to the old sectarian identity politics of the past, with appeals made within sectarian power bases. Northern Irish elections are therefore unedifying spectacles for their sectarianism. Paradoxically, however, the two largest parties that emerge from this sectarian sham-fight routinely then run the devolved government as amicably and effectively as possible, distancing themselves as best they can from the old style identity politics that has just won them the right to divide power between them.

The prospect of real change in Northern Ireland necessitates the reform of a political system that keeps on delivering more of the same. But this requires rethinking the Good Friday Agreement, which is enshrined in statute and must have the agreement of Irish and British governments. Both governments are Brexit-obsessed now and this is unlikely.

Another possible source of change is that people no longer vote for more of the same. The issues post-conflict Northern Ireland face are not Orange or Green – they are about its weak economic base, high levels of social deprivation and welfare dependency, environmental threats, inequalities around sexuality and women’s rights, the rise of ‘race’-hate crimes, and the uncertainty over Brexit. The problem Northern Irish voters face is that there are no other parties to vote for. The parties of the war generation still dominate the peace.

Voters who thus look for change end up voting for parties they know cannot deliver it – or they don’t vote at all.

The main consequence of McGuinness’s resignation may well be that it intensifies the disillusionment with politics of those whose involvement is needed in order for real change to take place.