Northern Ireland is one of the most car reliant regions in Europe. Professor John Barry advocates for free public transport for all in order to bring about numerous social, health and environmental benefits. 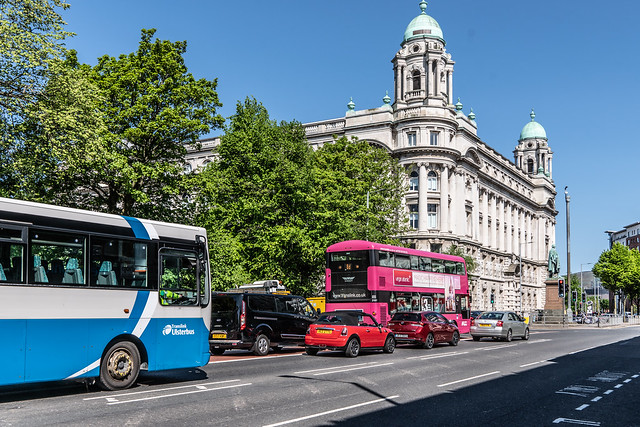 At a recent public event at which I spoke, ‘Climate Breakdown Belfast’ I made the argument for free public transportation in our city.

At an earlier meeting at QUB with Jonathon Porritt and representatives from the public sector, business, research and the environmental sectors, there was a discussion of transport and sustainability and the suggestion was made about progressively reducing car parking spaces in an effort to reduce the carbon footprint of transport in Belfast, and thus reducing the city’s contribution to climate breakdown. The latter could be viewed as a ‘push’ factor (or stick) while free public transport could be viewed as a ‘pull’ factor (carrot).  And while doubtless the idea of free public transport for all (and not as at present restricted to those who are 60 or over, registered blind or war disablement pensioners) will seem radical to many people, in this short piece, I would like to spell out some of the reasons and benefits of doing this.  Mainly, as a way to start a conversation on how do we locally begin to move from talk of climate and ecological emergencies to action.  And to suggest that we can solve a lot of other problems by quickly and in a planned, coordinated manner transitioning to a low carbon and climate resilient city.

In July this year, during the heatwave, Parisian authorities offered greatly reduced or free travel on the metro and suburban lines when pollution levels were dangerously high as a way of encouraging people to leave their cars at home.  They also banned around 60% of cars (the most polluting ones) from entering the city.

Encouraging a ‘modal shift’ from cars to public transposition (or walking and cycling) has a major health benefit by reducing pollution such as NOx but also decreasing carbon emissions, thereby achieving a double benefit of helping combat climate breakdown and increasing the health and wellbeing of citizens.

From the perspective of creating sustainable, liveable cities, the dominance of private, motorised cars using the internal combustion engine (ICE) based on burning oil or diesel is a significant obstacle to be overcome.  A city dominated by fossil fuel based private car-based transport is a net negative in terms of:

To name but a few.

Air quality concerns have grown in Belfast and other major cities such as London and Paris.  The toxic pollution from fossil fuel based transport (private and public), produces Particulate matter (PM), Volatile Organic Compounds (VOCs), Nitrogen oxides (NOx), Carbon monoxide (CO), and Sulphur dioxide (SO2).  All of which cause a wide variety of serious health impacts from respiratory ailments like asthma and bronchitis, and increase the risk of life-threatening conditions like cancer.

Part of the problem with car dominated transport in cities has to do with the fact that the full cost of that mobility choice is not accounted for if we only look at the cost to the car driver of the price of petrol or diesel per journey, for example.  This does not take into account the many ‘externalities’ of car use, that is the social costs in terms of the impacts on the health of others, the environmental harms produced or the contributions of car mobility to climate breakdown.  What is a private benefit can often be at a social cost.  Think of it this way: are the numbers of people killed and injured due to car dominated mobility an ‘acceptance level’ for its (mostly) private benefits?  Are the 55 people killed on Northern Ireland’s roads during 2018, the 5,749 injury collisions resulting in a total of 8,720 casualties a price worth paying for a car based transportation system?  Never mind that compared to other areas in the UK, Northern Ireland has the highest number of road deaths by region with 34 deaths per million population.

Might this have something to do with Northern Ireland being one of the most car reliant regions in Europe, where the average person in Northern Ireland makes 81.5% of all their journeys by car, compared to 63% in the UK, and just over 50% in the Republic of Ireland?

And what of the fact that for the vast majority of the time what is your car doing?  Lying idle, either parked at home or in the city centre, and unless you possess an electric car and you have it charging for free while you are not using it, it is providing no service or use to you.  And this then moves us to seeing that the real benefit is not the car per se (the mode of transport) but mobility itself (which can be fulfilled by a variety of other modes).  And thus we come to the nub of the issue, that the real issue, or not being anti-car per se, given they do have benefits, but those benefits can only be properly accounted for by viewing them in context (urban based mobility), taking into account the full social, health and environmental costs, and seeing that it is mobility that we should be focused on.  The question is not car or public transport but what mix and balance makes more sense from a ‘full spectrum, whole costs and benefits’ perspective.

Thus, when we factor in the other health, environmental and climate breakdown costs, we begin to see the full and true cost of a car heavy transportation system.   And revealing the true costs might then put the idea of free public transportation in perspective and the idea might not be viewed as so radical at all.  But rather, as other cities have and are doing, a sensible way to address a variety of issues and providing multiple co-benefits in our complex, climate changed, carbon constrained world.

A cogently argued and persuasive piece.

Thank you for highlighting the serious health impacts of poor air quality. The impact of air pollution on our heart and circulatory health is grave.

BHF funded research has found that exposure to elevated levels of air pollutants, especially fine (PM2.5) and ultrafine particulate matter, can increase the likelihood of a heart attack or stroke in vulnerable groups within 24 hours.

You can find out more about BHF research into air quality and the impact on cardiovascular health here- https://www.bhf.org.uk/what-we-do/our-research/risk-factor-research/air-pollution-research